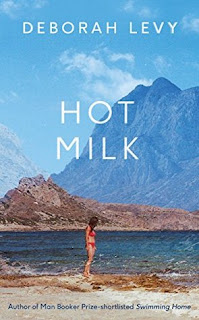 This is the first book I've read by Levy and being aware of the critical acclaim and literary label associated with her writing, I was slightly wary at how accessible I may find it. However, this was an immensely readable and utterly immersive novel which I honestly found I could not put down. It's not a thriller, it's not a page turner, but there is something very mesmerising and compelling about Levy's poetic prose. I found myself almost cast under a spell, held in a trance by her hypnotic writing, until the very last line. Combine this with it's short length of only 218 pages, and short chapters, it begs to be read in one sitting. And if you do put it down, your fingers will be itching to get back to the protagonist and her complicated psychology at the earliest opportunity!

In brief, the story is set in Almeria, Southern Spain, where Sofia and her mother are booked into a clinic to finally get treatment for her mother's multitude of illnesses which control, restrict and define their everyday life. Whether the illnesses are real or imagined is unclear, as is the effectiveness or validity of the course of treatment. The dialogue is sharp, witty and wonderfully observed.  Sometimes the short, selfish or blunt responses of the characters not just startles the reader out of the sultry heat of the beachside setting, but stops them in their tracks to absorb and process the implication and weight of the words. There are so many fantastic phrases and observations about love, mothers, fathers and siblings the book has much to offer with its exploration of relationships and how dysfunctional, suffocating and damaging family dynamics can be. Levy also explores feelings and again, the repetition and emphasis on emotions such as boldness, lust and self worth, which are at times more like statements or mantras, create moments of dramatic impact or self realisation for both the characters and reader.

Sofia and her mother are inextricably interwoven through years of deceit, manipulation and fear presenting a relationship which, as I mentioned, is fascinatingly dysfunctional. The emotional journey of Sofia throughout the novel is really one of coming of age; one of gradual realisation that indeed it is may be her that may benefit from a diagnosis from the doctor and a course of stark treatment (or stark comments about her character from the Doctor) rather than her mother.

It is a rich, powerful, visceral and beautifully written novel. Short but memorable with characters that will stay with me. I loved the thematic and recurring imagery about the jellyfish and the water. I loved the statements about Sofia's love for her mother, about her mother's legs - which were almost as much a character as her mother - and how the physical complaints changed over the course of the story. I loved the disinterest of Dr Gomez and his calm, sometimes cryptic questions or statements which were so poignant or cutting yet almost shook the pages with their resonance. And the secondary characters whose interaction adds further layers of psychological intrigue to the plot.

Hot Milk is a novel about identity, awakening, anger and desire. It's about mothers and daughters. It's about discovering and confronting the truths from which you've been hiding. I highly recommend!