A Little Bird Told Me by Marianne Holmes 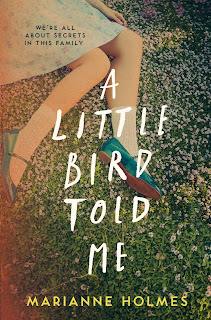 A LITTLE BIRD TOLD ME
by MARIANNE HOLMES

Besides, if you were one half evil, wouldn’t you want to know about the other half?


In the scorching summer of 1976, Robyn spends her days swimming at the Lido and tagging after her brother. It’s the perfect holiday – except for the crying women her mum keeps bringing home.

As the heatwave boils on, tensions in the town begin to simmer. Everyone is gossiping about her mum, a strange man is following her around, and worst of all, no one will tell Robyn the truth. But this town isn’t good at keeping secrets…

Twelve years later, Robyn returns home, to a house that has stood empty for years and a town that hasn’t moved on, forced to confront the mystery that haunted her that summer.

And atone for the part she played in it.

I've been lucky to read a few really beautifully written novels throughout my holiday this August, several set in the 70s and 80s and several dealing with families and secrets. A Little Bird Told Me was another such read and it was lovely to be taken back to the heat and sultry atmosphere of long summer days through Holmes's effective use of imagery and description, even though the weather here has turned so miserable and cold. It was a real treat to read such a well written, debut novel that explores the darker side of a character's past through such lyrical language.

Holmes's prose is impressive and she has a lovely fluency to her writing which shows off her skill in not only crafting great characters and a creating a powerful sense of setting, but also an ability to weave an intriguing tale of families and secrets. This is a well constructed coming of age novel seeped with intrigue and mystery.

Robyn's voice is particularly compelling. I love a story where we see the adult world though the eyes of child and Robyn's misunderstandings or inability to fully comprehend what might be happening around her are cleverly presented with authenticity. The relationship with her brother Kit is also beautifully navigated and well conveyed.

This is a very engaging read which effortlessly moves between 1976 and 1988. It feels very accomplished for a debut author and it's a very absorbing story with a blend of themes, issues and ideas told through a narrative which is compelling and gripping. A very rewarding read!

My thanks to the publisher for an advance copy of the novel and an invitation to join the Blog Tour!

Don't miss the other stops on the Blog Tour! 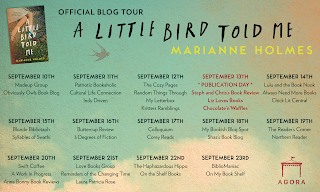 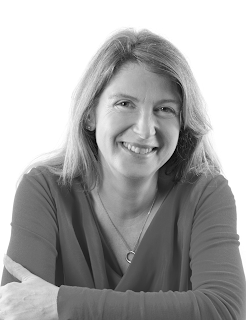 Marianne Holmes was born in Cyprus to RAF parents and bounced between the UK, Germany, Kuwait and Belgium until firmly basing herself in London – well, apart from those years in the Peak District.

A love of language led to degrees in Classics and Linguistics from the University of London but her desire to pay the mortgage steered her to a career in Marketing. After distracting herself in all sorts of ways over the years – sailing, flying, volunteering and running away to India – she is now definitely, absolutely concentrating on her writing. Well, that and making sure her children get fed, clothed and entertained. Obviously.

A Little Bird Told Me is Marianne’s first novel.