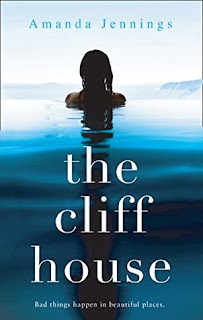 THE CLIFF HOUSE
by AMANDA JENNINGS

I could read Amanda Jennings' novels all day. Oh would you look at that, I just did.

Although now, I have a huge the 'book hangover' and desperately want to slip back inside the pages of the story and the world Jennings created through her evocative and beautiful prose.

This is my perfect novel. It has all my favourite ingredients for a compelling story - there's a house, a rugged seashore, a family full of complex emotional issues and they are all woven together with accomplished prose and a well executed story line.

Set in Cornwall, Jennings' writing subtly echoes the influence of Du Maurier, and possibly Christie and Sarah Waters, creating a lingering, ominous atmosphere of friction, unresolved tension and dubious motivations throughout this novel. The first mention of 'The Cliff House' is enough to intrigue the reader and Jennings continues to paint a vivid picture of this huge dream home overlooking the sea and inhabited by the dazzling Davenports who live a life full of fast cars, glamorous clothes and cocktails. We join sixteen year old Tamsyn as she crouches in the grass, watching them through her binoculars, making up her own script to what she sees, yearning to be part of this perfect world.

And then one day, Tamsyn meets Edie Davenport, home from boarding school and looking for companionship through the long summer of 1986 which stretches lazily ahead of them. But each of them seeks something very different from this relationship. Edie is bored, manipulative, precocious and far to wise for her years. Tamsyn, in contrast, is vulnerable (she's still recovering from the death of her father), naive, lonely and desperate to be part of what she thinks is a perfect family. This will be a summer that changes them both and shows that even seeming perfection can be flawed and ugly.

Firstly it's probably important to mention the setting as both Cornwall and 1986 are as much part of the novel as the main characters. Jennings firmly places the reader within this location, the attention to detail and references which continually help to establish the time and place are carefully done. The reader feels as if they are right there with the characters, hearing the sea crash beneath them, feeling the sun on their shoulders as they gaze into the distant horizon and wonder at Cliff House. The eighties is a great period to set the book - near enough for many readers to identify and relate to but removed enough from modern technology and social media to allow the characters to be more isolated from the big, wide, real world and emphasise their self absorption and the insular nature of some of the main characters.

I really loved the dynamics between Tamsyn and Edie. It's impossible not to relate to Tamsyn and share in her awkwardness as she stumbles through situations that make her uncomfortable as she tries to win Edie's affection and respect. It's not often that you read a book where the characters feel so completely real that you really are living in the pages with them and when the book ends, you miss their presence in your mind. To say all of the characters are completely three dimensional seems trite. They are beautifully crafted and incredibly convincing. The mention of small gestures, facial impressions, subtle interactions is so effective that Jennings is able to convey so much more about the people and leave suggestions dangling in the air until the reader finds them and adds them to the picture they are forming of them. Jennings so vividly captures Edie and Tamsyn through their thoughts, actions and physical movements that I was completely immersed in their unequal friendship.

'The Cliff House' is stunning. The location is perfect for a thriller and Jennings' literary prose is absorbing, compelling and addictive. The alternating points of view help to create tension and the reader is never able to shake of the sense of a pending thunderstorm despite the summer sun. 'The Cliff House' is atmospheric, evocative and with a deliciously dark sense of malevolence or threat.

Just as Tamsyn is enraptured by the Davenports, so was I. Just as she clamours for Edie's attention, so did I. Just as she ran along the dangerous cliff paths and sought out the austere building that she believes will offer her the escape she needs, so did I. Just as Tamsyn realises she can't turn away or reverse the series of events that unfold, I was unable to stop turning the pages, desperate to watch the facade fracture and both Edie and Tamsyn face their fears.

I am going to write another paragraph because quite frankly, this book is worth it! Jennings' writing is gorgeous and so well crafted that you sink into this story from the first page. 'The Cliff House' has a brilliant plot which gradually creates an unsettling sense of foreboding. It explores families but it also explores friendship. It explores Tamsyn's emotional journey and takes us through some very open moments of raw grief, trauma and drama but all the while something more malevolent and threatening lurks in the darker edges of the page until we reach a fantastic denouement.

The Cliff House is published by Harper Collins on the 17th May 2018.

My thanks to the publisher for an advance copy of this novel.

If you fancy coming along to hear Amanda talk about The Cliff House, why not book a ticket to my next book event on the 13th June? 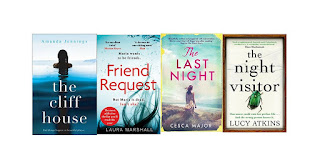