The Camera Lies by Ali Morgan 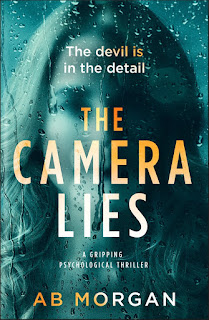 THE CAMERA LIES
A B MORGAN

Konrad Neale is a television presenter. His waning career has been given a new lease of life since he took on a series of hard-hitting documentaries that investigate miscarriages of justice.

Matthew Hawley has been convicted of the brutal murder of his wealthy attractive wife Helena. However, he has no memory of the events and insists he is not responsible for willingly killing her.

When Konrad interviews Matthew in prison, he explores the details of the murder and the possible motives behind it. But all is not as it seems.

Did Matthew murder his wife?

Soon the search is on to identify who else might be involved in the murder of Helena and Konrad is about to learn that sometimes the camera lies. 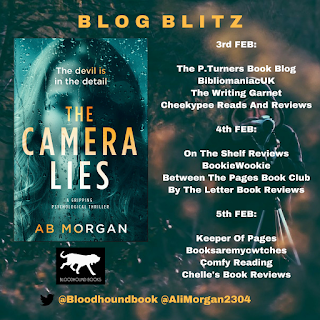 Well, let me tell you, this is not for the faint hearted! Or the squeamish. Or the prudish!

This is a gritty read; full of action, energy and unpleasant characters. It wasn't at all what I was expecting but I was quickly caught up in the plot which moved at a great pace, full of tension, complications and shocking revelations.

I really liked the concept of a TV presenter interviewing someone convicted of a crime as it is a bit of a change from finding yourself in a police interview room listening to a suspect confess, or not, to a crime. It also gives Morgan an opportunity to play around with the interaction between the characters as the dialogue, and behaviour, between them is not restricted by the conventions of a police interrogation - and this is a novel that doesn't like to be restricted by convention or expectation! I liked the dynamic between the two men and the question of motivation and trust which is more blurred than when the protagonist is a detective. I liked that I thought I knew what kind of story I was going to be reading, but within a few chapters my suspicions and expectations were challenged and the story took a rather more dark and sinister route.

I think what really impressed me was Morgan's ability to write from a male point of view and to have created these characters who are so authentic and believable. They are both flawed and and not always gaining much empathy from the reader but they are always fascinating. I was impressed how well Morgan portrayed Konrad. He's an ambitious creation but Morgan has crafted him well and he's a memorable protagonist.

There is quite a wide range of characters who appear throughout the story but they all feel three dimensional and most importantly, they all feel appropriately threatening and unreliable.

Ultimately though, I think the best thing about this novel was it's fierce energy, pace, drama and complexity. It's the kind of book you realise you're reading with your mouth half open because you are constantly in a state of tension, suspense, shock and disbelief. Morgan's skill is in her execution of a surprisingly intricate plot that winds in and out of itself in a way that the reader could never second guess.

I was totally impressed with this stand alone thriller. It was very different from any other crime book I've read recently and knowing what I do now about the behaviour and personalities of the main characters, I might have been a little wary but actually, it's a total page turner. It will leave you quite breathless.

I'm very much looking forward to seeing what Morgan might write next!

Alison Morgan started writing a couple of years ago to address that niggling question: could she write a book? The answer was a simple yes. She’s had to retire from the NHS a little earlier than planned, but has discovered a new passion. Writing. Her debut novel, A Justifiable Madness, was published by Bloodhound Books in September 2017 attracting great reviews for its refreshing premise and dark humour. With two further novels being published at the beginning of 2018, it seems Alison has a promising future as an author. Divine Poison is the second novel to feature Monica Morris, a mental health nurse, as the main protagonist in this crime mystery, but there are no plans for a series. Alison’s third suspense novel, The Camera Lies, steps away from the field of nursing and into the world of real crime documentary films.
Alison lives with her husband Andy and their dog Sadie, in a small village north of Bedford. She’s not the type to let life get in the way of adventure and so, always up for the next challenge, she decided to have a proper midlife crisis and learn to ride a motorbike. In August she passed, first time. Her husband was impressed until she swung her leg over his prized Triumph and roared off with a big grin on her face. ‘Research for the next book,’ she cried. The fourth book is under construction and does indeed feature motorbikes.
Links:
Alison Morgan: writes under the name AB Morgan
http://www.abmorgan.co.uk
Email          alison@abmorgan.co.uk
Facebook  @ABMorganwriter
Twitter       @AliMorgan2304
DON"T MISS THE OTHER STOPS ON THE BLOGBLITZ! 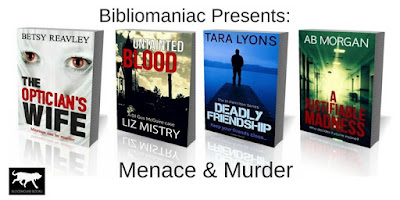