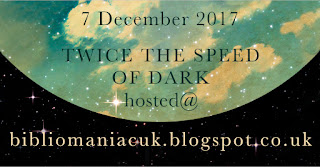 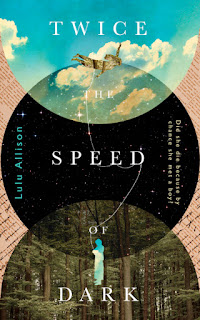 Today I have a really interesting book to share with you. Twice the Speed of Dark is a literary novel; a mesmerising and poetic read about a mother's loss and her attempts to come to terms with the death of her daughter.

What does it mean to care about the deaths of distant strangers? What does it take to bear the loss of a child?

In an isolated house surrounded by fields and woodland, Anna sits at her kitchen table, her cramped writing fills the notebook in front of her. Anna scans the news for reports in which the victims of war or terror are presented only as a number. It is only in this vigil, this act of love for strangers, that she allows herself an emotional connection to the world.

Her daughter Caitlin was killed on the eve of her twentieth birthday by her violent boyfriend. Since her death, Caitlin has been subject to a perplexing dark odyssey, pushed and pulled past stars and distant planets.She pieces together her story, combining what she has learnt since her death and what she knew before, until she is finally able to reclaim herself from the debilitating effects of the violence that eventually ended her life, freeing herself at last.

With the release from prison of Caitlin’s killer, Anna’s uneasy equilibrium is thrown into disarray and she falls into long-suppressed fury and mental breakdown.

As Caitlin is able to free herself from the tyranny of violence, will Anna be able to unburden the debilitations of grief and live her life with love and happiness once more?

This is a very unusual and highly original novel. The author's artistic background is evident from the mesmerising, poetic and lyrical flow of the words which paint a vivid portrayal of grief and loss. The narrative is divided between Caitlin and her mother, between third person and first and the use of italics for Caitlin's sections enhances the dream like quality of the prose as Caitlin speaks to us from whatever unknown limbo that she finds herself inhabiting.

'To start with, when I was first dead, I was confused, caught between memory and experience, between memories from before and those since'

It's a challenge to write from the point of view of a character who is dead without falling into cliches, becoming trite or losing conviction. The reader easily buys in to the fact that Caitlin is dead yet still speaking to us. Allison makes her voice fascinating and her initial descriptions of her life suspended in a  'kaleidoscope jangle' as she tries to 'knit my story stronger for the telling' are very powerful. I was curious to see how Allison would develop and sustain this across the entire novel, yet she does so effectively. Caitlin reveals more of her relationship with Ryan and gradually the events leading up to her death show themselves. This balance between contemplation and back story work really well, particularly alongside Anna's more meditative narration.

Anna has retired and thought the 'end to the professional performance would bring relief, but the removal of the distraction of a demanding career gave her too much time for other thoughts' and her grief overwhelms her.

'cracks began to appear in the walls she had built within herself, the internal prison cell that held her grief'

The depiction of Anna is hugely emotive, powerful and haunting. Anna's frustration at how little death seems to mean in the world is triggered after the court case against Caitlin's boyfriend, where she struggles to accept the 'bland retelling' and  'indifference' towards Caitlin who is only referred to as 'a component', rather than her beautiful daughter who had her whole life ahead of her.

'death it seemed was only of interest if it excited the morbid thrill of the unusual, the lavish fetishising of television crime dramas. Distant strangers were too insignificant to warrant the care of mourning'

So Anna begins a new project. She searches the newspapers for stories of death, and whenever she finds the name or photo of someone who is killed, she writes a short paragraph about them. She calls it her 'accounting' and she wants to acknowledge these people who are not even named, numbered or considered in the reporting of accidents and terrorist attacks. These short paragraphs are shared separately within the narrative and although poignant, they are like poems or literary photographs; an effective juxtaposition between the intensity of Anna's prose and Caitlin's thoughts. I think they are also hugely thought provoking and a creative way of emphasising some of the themes raised in the novel. It also shows how powerful writing can be as a form of therapy as Anna's character seeks solace in her hobby.

There is very little, if any dialogue in the novel and so this really is book for people who love language, love character and love literature. It is accessible and it is a story about a mother and daughter, a relationship and a death, but it is more reflective than vengeful. It is sad but it is curious. It is hypnotic and although desperate and dealing with grief, loss and death, it is fluent and the reader is carried along throughout the novel, immersed in the thoughts and emotional journeys of the protagonists. The imagery is rich and there are plenty of lines worthy of note and pause, for example:

'filigree ghost-patterns of love and grief crept across Anna's hollowed insides like lichen, like salt crystals blooming on the innards of a calcified cave'

Allison's writing is interesting, unique, bold and brave. I enjoyed Twice the Speed of Dark and I was intrigued by it.

My thanks to the author for an advance copy of the novel. Twice the Speed of Dark is published by Unbound and available to buy here. 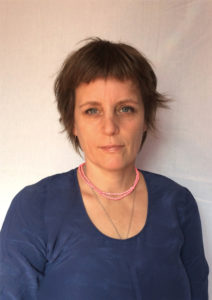 Lulu Allison studied at Central St Martin’s School of Art. She then travelled and lived abroad for a number of years, playing in bands in New Zealand, teaching scuba diving in Fiji, making spectacle hinges in a factory in Germany before settling in Brighton. She exhibited her art and worked as a community artist for Towner Gallery and Fabrica Gallery whilst raising two children.

In 2013 what began as an art project took her into writing and she unexpectedly discovered what she should have been doing all along. The art project became Twice the speed of Dark, which on completion, was taken up by Unbound and published in the autumn of 2017.

Twice the Speed of Dark is her first novel. She is currently writing a second called Wetlands