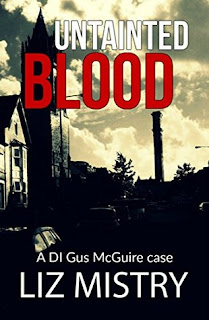 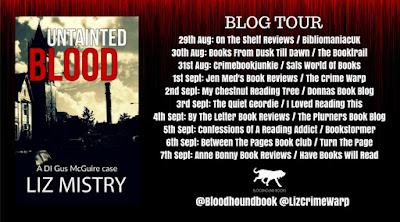 I am delighted to be on the first day for the Blog Tour for Untainted Blood by Liz Mistry! Thank you so much to Liz and Sarah Hardy at Bloodhoundbooks for inviting me to join the tour and for the advance copy of the book in return for my honest review!

And thank you to Bloodhound books too for introducing me to a whole new series of books that had somehow escaped by attention!!

Untainted Blood is the latest unmissable Crime Thriller from author Liz Mistry. I have not read the first two books in this series (Unquiet Souls & Uncoiled Lies) which not only am I embarrassed about - I'm also a little annoyed with myself that I've missed out on a series with so much promise!

In a city that is already volatile, tensions mount  after a Tory MP in Bradford Central is discredited leaving the door open for the extreme right-wing candidate, Graeme Weston, to stand in the resultant by-election.
However, Graeme Weston is not what he appears to be and with secrets jeopardising his political career, he must tread very carefully.
Meanwhile, a serial killer targets Asian men who lead alternatives lifestyles and delivers his own form of torture.
As DI Gus McGuire’s team close in, the deranged killer begins to unravel and in an unexpected twist the stakes are raised for Gus.
Are the murders linked to the political scandals or is there another motive behind them?
DI Gus McGuire and his team are back and this might be their toughest case yet.

Yes, it does sound good doesn't it? Well it is good and yes, I do recommend it! Don't be like me and let this series pass you by!

I thought this thriller was a complete breath of fresh air. Why? Because it felt really alive, really contemporary and really relevant. It references the political and social concerns of today and it tackles the issues that face communities today.

This crime novel also felt full of energy. It is fast paced, action packed, full of dialogue and vividly drawn characters. It is firmly rooted in Bradford with every last attention to detail included so that it is very easy to picture the setting. The location and setting is important to the novel and the author has depicted the city and area very effectively. I have a little knowledge of the area and felt that it was really accurate in its portrayal. Mistry is obviously passionate about the area and the city's community.

There are several key characters to get to know in the book and they are all well crafted and all very three dimensional. There is a very effective anonymous narrative that is suitably threatening and menacing and actually, all the narratives have strong voices and distinctive characters. Although the chapters are often short and they switch from character to character quite rapidly, it is easy to follow and easy to build up a picture of who everyone is and what is going on. It is the first book I have read in the series and I did find it fine to read as a stand alone, but as with all series, obviously there is an overriding story arc to enjoy so I'm sure I would benefit from reading Unquiet Souls and Uncoiled Lies - something I will rectify immediately - even if it's just because the titles are so clever!

Mistry ensures that there is a real sense of urgency and pace to the novel by using each day of the week as a heading. Immediately this creates high level tension and a sense of building towards something or that sense of a ticking clock which inspires all sorts of excitement and trepidation for a crime novel! The location and time of day is also sighted at the beginning of each section which also keeps the reader on their toes and enables Mistry to weave in several different threads effectively. As I said before, this is a fact paced novel and there is no time to pause for breath as Mistry launches the reader headlong into the action.

I don't want to give away any spoilers or reveal anything that might give something away but I would recommend Untainted Blood. It has every single ingredient you want in a fast paced, exciting, modern day crime thriller. Mistry knows how to write a great detective story and she has also written a story that is full of diversity and social issues as well as crime, with a confident and assured voice. I would love to see this televised as it reads so well and would transfer so easily to screen. The book will appeal to anyone who enjoys a solid detective thriller.
LIZ MISTRY 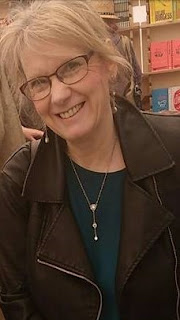 As well as writing crime fiction, Liz is co-founder of and main contributor to The Crime Warp blog, which reviews all areas of crime fiction, interviews crime authors and participates in blog tours.  She is the main publicist for the blog, using social media to promote their presence.

Liz is an ex teacher who has taught in inner city Bradford schools for over twenty years.  Her husband of nearly 30 years is Indian and they have three children.  They live in inner city Bradford and Liz likes to use the rich tapestry of her life in Bradford, combined with her Scottish heritage, in her writing.

Don't forget to follow the rest of the Blog Tour for Untainted Blood and see what all the other bloggers have to say about this book! 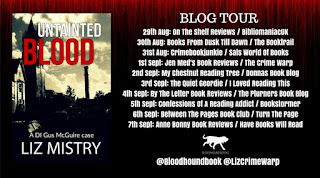