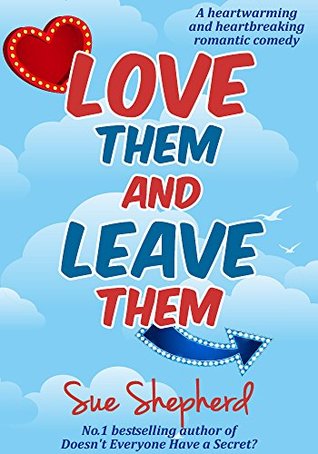 BLOG TOUR
LOVE THEM AND LEAVE THEM
BY SUE SHEPHERD

The new heart-warming and heart-breaking romantic comedy from the No.1 bestselling author of Doesn’t Everyone Have a Secret?

Love Them and Leave Them by Sue Shepherd  - Synopsis

Sometimes you have to leave the one you love … sometimes you’re the one who’s left behind.

On his way home, Ed makes a split-second decision that changes the lives of all those who love him.

Six years on, Ed’s daughter, Jessie, is stuck in a job with no prospects, her dreams never fulfilled. It will take more than her unreliable boyfriend, Chris, and temperamental best friend, Coco, to give her the confidence to get her life back on track.

But what if Ed had made another decision? It could all have been so different …

Six years on, Ed’s daughter, Jessica, has a successful career, loving boyfriend, Nick, and a keen eye on her dream home. But when new clients, a temperamental Coco, and her unreliable boyfriend, Chris, walk into her life, Jessica’s perfect world soon starts to unravel.

"We make choices all the time. Left or right? Stay or go? Choices that appear insignificant, when in reality they may be just as pivotal as the 'important' ones. The consequences of these seemingly insignificant choices can be far reaching and can, on occasion, affect people we'll never even meet."

One day Bibliomaniac was offered the chance to read Love Them and Leave Them, an opportunity which she seized upon having seen so many positive reviews of it on social media and from her fellow book bloggers whose opinion she trusted impeccably.

She read it straight away, blogged about it and reviewed it, feeling happy to have had the chance to enjoy such a great story from the fabulous Sue Shepherd.

One day Bibliomaniac was offered the chance to read Love Them and Leave Them, an opportunity which she seized upon having seen so many positive reviews of it on social media and from her fellow book bloggers whose opinion she trusted impeccably.

But, life is never easy and before she knew it, Love Them and Leave Them got swallowed up in a back log of ARC requests - Bibliomaniac was trying to come to terms with her unhealthy relationship with NetGalley - and it sat on her TBR pile. Lonely, neglected and forgotten about. Until one day, the very generous Emma Mitchell (@emmamitchellfpr  emmathelittlebookworm.wordpress.com) gently reminded Bibliomaniac that she still had to review Sue's book and would she like a place on the blog tour? Spurred into action, Bibliomaniac knew what she had to do.

Whichever 'story' you chose to believe, whichever version is the 'truth', fortunately at the end of the day the outcome was the same: I got there - I caught up with my fellow book bloggers and joined them in finding a great book! Late to the party, I was delighted to find that Love Them and Leave Them was both heartbreaking and heartwarming, sad and tragic, funny and full of humour. It's a love it not leave it recommendation from me!

As Shepherd shows in her novel, sometimes the journey to your destination is different from how you imagine. How you get there can change, or be full of obstacles. You might not choose the same route as everyone else but ultimately sometimes the destination can turn out to be the same. I love this premise for a novel as I think life is full of questions about choices, chance meetings, coincidences, opportunities and fate. And there's always a part of us wondering what if...... particularly when we look back at some of the decisions we made.

Jessica, in both versions, is a character who the reader will warm to immediately. Ed's decision has huge ramifications for her - in one version, devastatingly so. In another, although everything seems to be perfect, there are trials and tribulations in store for Jessica and that journey of self discovery still has to be taken. Her relationship with her father is very convincing and very moving in both accounts.

There were a few moments when I felt Barrister Jessica's life was a little bit too good to be true, but there are underlying tensions revealed as we get to see a bit more of her relationship with her boyfriend Nick. I loved Shepherd's analogy of how the two characters eat their meals to encapsulate so perfectly the difference between them.

"I get the veg out of the way early on. It works for me. I know how to pace myself....."
"I just pick up whatever I fancy from the plate. A different mouthful every time."

I was intrigued by the storyline. Initially I was concerned that following Jessica through two different versions of events might become confusing - particularly when their worlds begin to collide in such a unexpected manner but not at any point at all did I get in a muddle or forget who was who, which story I was involved in or who was doing what in that particular moment. Shepherd manages her plot effortlessly and seamlessly.

This book is a gentle read. It's entertaining and Shepherd has a pleasing turn of phrase. Although it is a reasonably light read, it is not without moments of poignancy, shock, sadness and drama. The characters come to life and the dynamics between them are believable. I enjoyed the challenge that Shepherd set in making me really think about the characters as we see them behaving in different situations. I did change my mind a few times about some of them!

Shepherd explores a lot of interesting themes about friendship, parenthood, responsibility, success, love, happiness and fate. All great universal themes which any reader will enjoy contemplating. All in all this is a very satisfying read.

I'm going to leave you with some quotes from the end that I thought captured the essence of the novel as well as generally being very good advice for all of us, whichever stage of our journey we are on and whichever version of life we are traveling:

"We'll be past this awful bit soon. We've just got to get the turbulence out of the way. Focus on the prize at the end."

I will just finish with my huge apologies to Sue Shepherd for taking so long to review her second novel and I must say a huge thank you to Emma and Sue for letting me join in the Blog Tour! Don't be like me and leave this book too long - give it a go, I'm sure you'll certainly enjoy it -if not love it!

To buy a copy of Love Them and Leave Them please click here:

Sue Shepherd writes contemporary romance and enjoys creating novels with heart, laughs and naughtiness. She doesn’t pull any punches when choosing her subjects, but manages to handle her characters’ challenging situations with sensitivity and humour. Her debut novel, Doesn't Everyone Have a Secret? was published by Corazon Books in March 2015. It reached the top 10 UK Kindle chart, and also topped the romantic comedy, contemporary romance and humour charts. It became available in paperback on Amazon in November 2015.

Sue’s second novel, Love Them and Leave Them, was published in September 2016.

Sue lives on the picturesqueue Isle of Wight with her husband, two sons and a standard poodle. Her passions in life are: her family, writing, the sea-side and all the beautiful purple things her sons have bought her over the years. Ask Sue to plan too far in advance and you'll give her the heebie-jeebies and she'd prefer you not to mention Christmas until at least November! 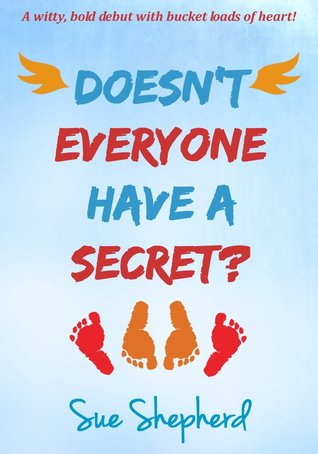 Doesn’t Everyone Have a Secret? is about three very different people, each with a secret, whose lives collide in unexpected ways.
Steph is a harrassed mum who’s considering an affair with her children’s sexy headmaster. Penny is trying to deal with a crush on her boss, OCD and a sad secret from her childhood. And Mike is a vicar who is being blackmailed for his secret, although it’s not all that it seems!
Meanwhile, all three are being watched over by their own guardian angels, who try to push them in the right direction and help move their lives along – but not always successfully …
Doesn’t Everyone Have a Secret? is genuinely laugh out loud funny, but also deals in a sensitive way with serious problems that any of us could face in life. Sue Shepherd’s debut novel is bold, it doesn’t pull any punches, and it has bucket loads of heart.
You can follow Sue Shepherd on Twitter @thatsueshepherd

For more recommendations and reviews you can follow me @katherinesunde3 (bibliomaniacuk) or sign up to receive future blog posts via email using the "follow" button on the right.