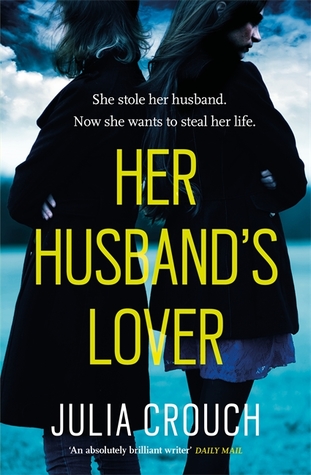 She stole her husband. Now she wants to take her life.After the horrors of the past, Louisa Williams is desperate to make a clean start. Her husband Sam is dead. Her children, too, are gone, victims of the car accident in which he died. Sam said that she would never get away from him. That he would hound her to death if she tried to leave. Louisa never thought that he would want to harm their children though. But then she never thought that he would betray her with a woman like Sophie. And now Sophie is determined to take all that Louisa has left. She wants to destroy her reputation and to take what she thinks is owed her - the life she would have had if Sam had lived.Her husband's lover wants to take her life. The only question is will Louisa let her?

This novel starts off in the way it continues until the very last word; dramatic, intense, confusing and with a unnerving sense of threat from something unknown.

It opens with a terrible and devastating car crash – which could be a good metaphor for the entire book as this is a messy, complicated, confusing story, full of moments that completely change your thoughts and feelings towards the characters.

The opening scene of Louisa escaping her battered car which was chased off the road by her husband Sam is very real and emotionally intense.

“Where is he though? Are they still in danger?”

Louisa’s panic about Sam overrides everything else around her and this immediately unleashes a torrent of questions from the reader about what has happened, why she was trying to escape and what has Sam done to propel them into this desperate situation. The added horror that both her children have died in the accident makes this an opening that can only hook the reader in and drag them quickly only on a journey that will keep them balancing on the edge of their seat, wishing the sofa had a seatbelt to keep them tightly in place as the twists, turns, emergency stops and law breaking speed of the story hurtle them along on a ride that can only leave you feeling distinctly nauseous.

So Crouch continues to set the scene. Louise is recovering and they tell her she is “lucky”, but she feels anything but. Crouch evokes a heavy atmosphere of fear which will keep you checking over your shoulder as she builds more and more tension with hints that Louisa’s life is still at stake; that her marriage and family life have been hellish.  The anonymous nature of the voice and the threat create even more suspense and tension.

"The face disappears from above her and she thinks she has escaped. But then, a prickle of hot breath burns at her ear. “If you survive,” the voice says, “if you survive, I’m not going to let you get away with it. If you survive, you’d better watch out, Louisa.”

As we read on, more and more is revealed about Sam. His past, his backstory, the basis on which his relationship with Louisa is based, all making the reader quite uncomfortable. Our sympathy is with Louisa although there are a few subtle clues that imply all may not be as it seems.....

“She has supported him through the fallout from the horrible, brutal murder of his first wife, the ensuing intrusion and suspicion of the police and, finally, vindication of his pleas of innocence and the dropping of all charges. He wouldn’t be able to find anyone else who would love him like she does.”

Generally though we are on her side:

“Tragic Louisa Williams. That prefix has been applied to her name so many times that she should probably add it to her passport.”

I must say that actually I found the passages when Louisa is at a toddler group very powerful. I thought Crouch’s description of the “wave of maternal hostility that Louisa can practically see rolling across the room towards her” was very effective and captured the situation so well. I also liked her description of NOISY TOYS and  “the cacophony” which “set Louisa’s teeth on edge.” It set mine of edge too. If there is one thing this author can do is put you in the same room and the same moment as their character. There is no escaping from the events and characters in this book and there is no point trying to put it down, it won’t let you.

The story begins from Louisa’s view point and initially there is no reason not to trust her. Until we are introduced to Sophie, Sam’s lover; until the novel begins to jump backwards and forwards and colour in some of the edges around the situation. And then things change gear, take us off road- suddenly it’s as if we’ve done a U turn and we are no longer sure of our destination.

I think another reason that it is hard to put the book down is that actually the characters are not that nice. When Louisa reads the news headlines and the vindictive stories the press have found to print about her, she reflects that:

“Making a monster of the victim is a popular sport, particularly when she’s a woman.”

But how far did they have to go to make a monster? What is the truth behind these allegations about Louisa?

For me, this book really was about monsters. And victims. And the sport of monsters. I kept wondering who was the monster, who was the victim and who was behaving monstrously to who.  It’s hard to talk about the book any more without giving anything away, you’ll just have to read it for yourself and find out the answers – if you can! But it is intriguing and it is really interesting to see a story generated by characters that actually don’t always have very redeeming features, characters that you are not always inclined to side with or support but at the same time you are quite fascinated by them. However, if I'm beging honest, I did find the characters rather too monstrous for me and did find the continual sinking levels to which events seem to fall too quite difficult to cope with at times. I wonder if this is a book that you almost have to be in the right mindset for or be prepared to take yourself to a dark place for a while.

There is absolutely no doubt that this is a very gripping novel and certainly has an incredibly clever plot which has been constructed with meticulous management, control and delivery. For me, I did find the different narrative threads and the changes in time and place confusing at times. I did have to work quite hard to keep up with everything but I think this is the purpose of the author. I think Crouch quite deliberately wants to keep spinning us around and around and not ever let us turn off the roundabout to happy endings.

Worth every moment of your journey!

If you loved "The Girl on the Train" then "Her Husband's Lover" is your next ticket to a thrilling read - it will totally and utterly make you miss your stop!

“Her Husband’s Lover” is published on 26th January 2017 by Headline.