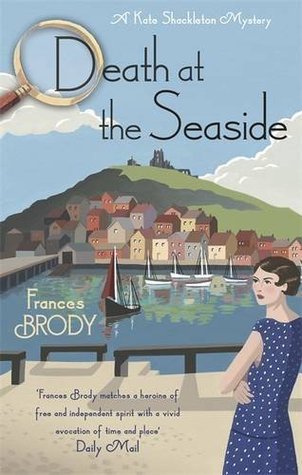 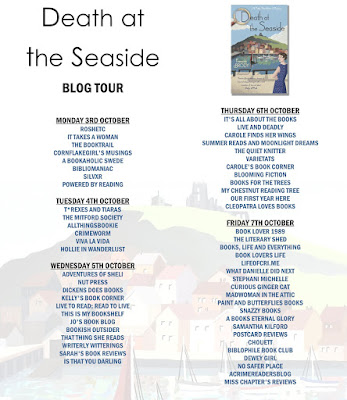 It is my privilege to kick off the Blog Tour for "Death at the Seaside" by Frances Brody today!

Nothing ever happens in August, and tenacious sleuth Kate Shackleton feels like she deserves a break. Heading off for a long-overdue holiday to Whitby, she visits her school friend Alma who works as a fortune teller there.
Kate had been looking forward to a relaxing seaside sojourn, but upon arrival discovers that Alma’s daughter Felicity has disappeared, leaving her mother a note and the pawn ticket for their only asset: a watch-guard. What makes this more intriguing is the jeweller who advanced Felicity the thirty shillings is Jack Phillips, Alma’s current gentleman friend.
Kate can’t help but become involved, and goes to the jeweller’s shop to get some answers. When she makes a horrifying discovery in the back room, it soon becomes clear that her services are needed. Met by a wall of silence by town officials, keen to maintain Whitby’s idyllic façade, it’s up to Kate – ably assisted by Jim Sykes and Mrs Sugden – to discover the truth behind Felicity’s disappearance.
And they say nothing happens in August . . .

This book from Little, Brown Book Group has to have one of the most appealing covers around at the moment! A classy vintage look with such a stylish font makes it very eye-catching and captures the 1920s setting perfectly.

There has been a bit of a resurgence in "cosy crime" novels recently and Brody's latest title in the Kate Shackleton series definitely fits into the genre!

The Independent refers to the book as a "winning tale full of colourful shenanigans". I really like the use of the word "shenanigans" as that's exactly what this story is full of. It's a lightweight, entertaining tale with a likeable protagonist whose amateur sleuth work shows her to have intelligence, resilience and perseverance. Shackleton seems a little weary of the demands of her role at times and by the way she is under-appreciated by the other characters, but this makes her more endearing and amiable.

This is a charming read. There is a serious crime, a real investigation and a mystery to solve but this book feels as if it should read while sipping tea from bone china, helping yourself to a thin cucumber sandwich from a three tier cake stand and listening to some rhythmic twenties jazz music. Brody's writing allows the reader to relax and enjoy the very visual story with it's gentle humour and soft smiles.

So from the outset, it's clear Kate isn't going to get the relaxing break she's expecting on her return to Whitby. As soon as she arrives, her Goddaughter Felicity has gone missing and Felicity's mother, Alma, reveals her husband's bigamy:

The twenties obviously was a very different time for women and marriage so the shame of Alma's plight and Felicity's illegitimacy are of much more significance. As Alma candidly points out, Felicity has enough on her plate with a fortune teller for a mother. I really enjoyed Alma's dialogue. Her  quips, blunt acknowledgements and frank statements such as, "I do tell other people's fortunes and see their futures but my own evades me entirely," are refreshing and funny. Not only does Alma tell fortunes, she also does automatic writing when the spirits send her messages. This was an intriguing plot device - and added a level of suspense to the plot but again, Brody's expression while recounting these scenes remains wry; Alma's frustration and impatience with the more mundane messages keeps the scene light.

Whitby is a great setting for a murder story. Birth place of Stoker's "Dracula", a town already seeped in connotations of darkness, with cliff faces and one-hundred-and-ninety-nine step climbs to the ruined Abbey, it's suitably atmospheric. Brody captures it well, as she does the historical era with convincing and well researched details.

Mrs Shackleton's relationship with Sergeant Garvin is well developed. I enjoyed their exchanges and interactions. For example when Kate is caught late at night exploring the Abbey grounds, Sergeant Garvin questions  her:

"Not that I am well-acquainted with ladies' bags, but the contents seem rather unusual....If one were are war, which thankfully we are not, then some of those items would arouse suspicion. Camera, torch, knife, hip flask,  unauthorised police whistle, set of keys.... You might explain why these items rather than a purse, comb and powder compact."

I would recommend this book to those who like a traditional mystery thriller and historical fiction.

My thanks to Little, Brown Book Group for a copy of the paperback in return for a fair and honest review. Thank you also for inviting me on the Blog Tour!

Frances Brody is the author of the Kate Shackleton mysteries, as well as many stories and plays for BBC Radio, scripts for television and four sagas, one of which won the HarperCollins Elizabeth Elgin Award. Her stage plays have been toured by several theatre companies and produced at Manchester Library Theatre, the Gate and Nottingham Playhouse, and Jehad was nominated for a Time Out Award.

DON'T FORGET TO FOLLOW THE OTHER BLOG TOUR POSTS TODAY AND FOR THE REST OF THE WEEK! 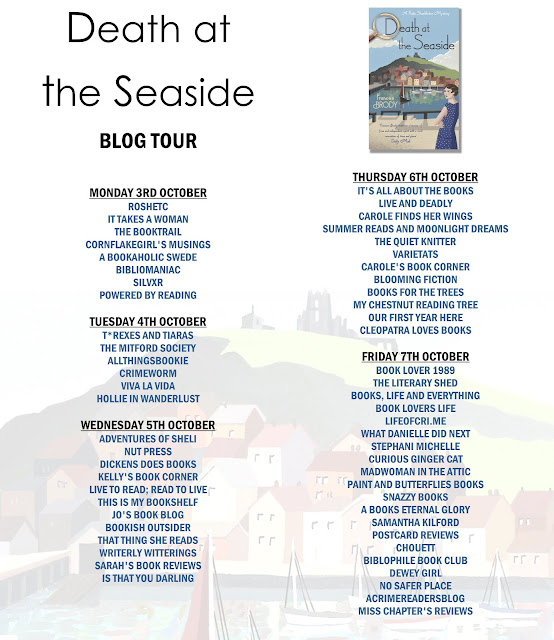