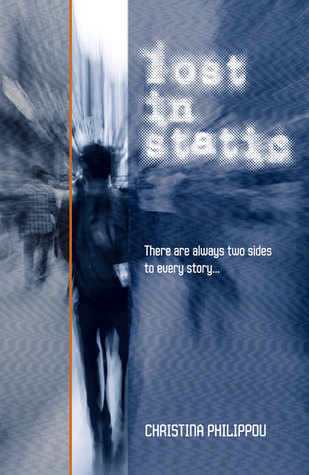 Callum has a family secret. Yasmine wants to know it. Juliette thinks nobody knows hers. All Ruby wants is to reinvent herself.
Sometimes growing up is seeing someone else’s side of the story.


This is a gritty, modern, coming of age novel about four people in their first year away at University. Four people with things to hide, things to run away from and things to discover about themselves. It opens with a shocking event which then leaves the reader trying to piece together the dynamics between the characters and the truth behind what actually happened.

This is a bold debut. Philippou has chosen to have not one, but four protagonists. Each protagonist uses a different kind of narrative voice to tell their story ranging from email, internal voice, first person and third person. Philippou has to convince us not only of her ability to write authentically from four points of view, but also of her ability to write from a male perspective as well as a female one.

And convince us she does.

There is no doubt Philippou can write.

It is hard to believe this is a debut. The complex characters, each with a complex story to tell, are all convincing and believable. Because of the different style of prose for each voice, it is always easy to differentiate between them and keep track of who is talking. The four different story lines from each character are managed with competence and skill and despite it being a multi-layered plot, it is not overtly confusing.

Ruby's chapters use italics to reveal her internal thoughts which feel like muttered comments under her breath. Juliette address the reader directly with her first person narrative which, for me, made her feel more omniscient - her hints of the foreboding future very intriguing. Callum writes emails to an anonymous recipient which adds more hints of expectation, particularly as his obsession and hurt deepen. Yasmin's third person narrative is just downright menacing and manipulative. There is an overriding sense of conspiracy and that delicious sense of an unreliable narrator at large.

Philippou obviously loves words as her vocabulary is excellent. There were a few occasions when I felt perhaps a particular word wasn't quite in keeping with the voice of a young undergraduate and it grated a little, but generally I really enjoyed Philippou's choice of language and admired her wide ranging, confident and intelligent vocabulary.

Her evocation of student life is perfect. She has captured student life brilliantly; the description of the nightclub with its "shanty town toilet style", the "stale odour permeating every corner" and weeks that come and go "quickly, lubricated by generous alcohol consumption…" were very reminiscent and will be resonant with all students past and present.

The chapters are very short and sweet. Well, maybe not that sweet! The pace therefore is very fluent and it is easy to keep reading "just another chapter" as each one is so brief but also because the reader wants to keep track of each storyline. Such pace also ensures a dramatic race along to the ending. The atmosphere of the novel is full of suspense that is deliberately reinforced by the words of the characters:

"And now we have a problem. We both know you don’t want to hear this part of the story but I can’t resolve anything if I don’t tell you. Please keep listening – I really need you to."

I would just quietly add that there is a lot of drink, drugs and swearing in this novel. It's not particularly gratuitous and generally in keeping with the context of the novel, but it could mean this book will not be everyone's cup of tea.

Christina Philippou is a dedicated and exceptional book blogger and her understanding of language, structure, suspense, intrigue and three dimensional characters from her extensive reading and reviewing is self evident in this, her debut. I was really excited to see she had written something and am very grateful to the Facebook Group "The Book Club (TBC)" for giving me the opportunity to review an ARC ahead of publication. I hope Christina also enjoys her experience of the world of blogging from "the other side"!

Thanks so much TBC for the ARC copy in return for my honest opinion.

"Lost in Static" by Christina Philippou will be published on 15th September 2016.