"Cut to the Bone" Alex Caan 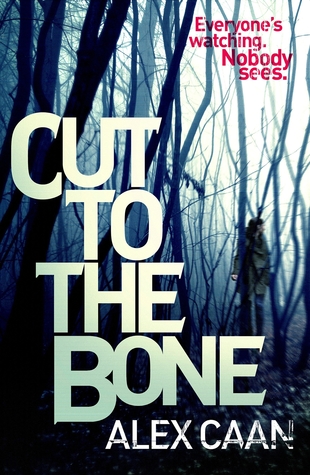 This book opens with one of the most captivating introductions I have read in a while! Caan's use of short sentences creates tension effectively, gripping the reader and pulling them straight into the dark and frightening situation which sets the tone for the rest of this compelling thriller.

The chapter continues by telling us "she is strapped to a chair, arms and legs bound, mouth taped." Ruby's panic and fear are well captured with the description of her imprisonment and sense of desperation: "The walls are coming in . The darkness has icy fingers. Her skin is on fire. She wants her mother. She can't breathe. She is drowning."

In Chapter 2 we meet our protagonist DCI Kate Riley - a highly experienced detective with a doctorate from Browns. She receives a phone call at 2.38 am about a 20 year old girl who has been missing for 8 hours. Justin Hope, the Commissioner, has requested an investigation even though it is quite unprecedented at this early stage given the age of the missing girl. It is unclear why he is involved as the parents dialled 999 and have no apparent connection with Hope.

Chapter 3 introduces another key character, DS Zain Harris. He is first on the scene at the missing girl's house - the girl we now know to be Ruby. Ruby is a Vlogger and YouTube star who posts lifestyle tips, make up tutorials and fashion advice. She is making an impressive income through freebies, sponsorship and advertising. She has an incredible 2 million followers. That night, she had just gone out for a walk and never returned. As Zain listens to the parents' answers to his questions, he can't help but feel that they are "prompting each other for answers....playing a part....their responses were scripted," but he tries to "switch off his paranoia". The theme of playing parts, and scripted scenes is repeated throughout the novel as Caan explores the world of social media; the blurred lines between someone's real and on line persona. Paranoia is also a key theme in the book - both Zain and Katy seem to suffer from it, although the roots and causes are mysteriously secret and buried deep in their back stories which Caan tantalises the reader with, only dropping the odd clue or half picture so their characters remain as mysterious as the actual crime they are investigating. It is very intriguing and I was very impressed with his handling of not only a complex plot, but also his management of complex characters. It is hard to believe it is a debut novel.

The chapters continue to alternate between Kate and Zain. They are very short and this book definitely moves with great pace and action. Although quite different characters, Kate and Zain form a bond quickly and even at the first interview with Ruby's parents the "silence was heavy between them, acquiring layers of something unspoken." I also liked the way that the mystery of Kate's home life - the baby monitor she kept by her bed with the blond wig she had to put on before responding to it, the dark fear shrouding her arrival in London- were entwined with the main criminal investigation of trying to find Ruby. As I said, this novel has a multi layered, intricate plot with lots of different threads for the reader to wonder about, be distracted by and ensuring that they are kept very much on the edge of their seat until the last page.

Zain is also a fascinating character. Is he good? Is he bad? Is he right in some of the procedural decisions he makes? What is his motive and to whom is he truly loyal? What is he caught up in? Nothing is quite as it seems and he is also compromised and full of internal conflict.

The case is difficult. Kate "was paddling...going through the motions, picking up everything she could, throwing it in the air and seeing what landed." As the book continues into the last third, the police investigation suddenly delves much deeper and into something much much bigger and more sinister than anyone could have anticipated. We learn more about Ruby, her violent and unpredictable boyfriend Dan, the mercenary world of Vlogging and the manipulative power of huge corporations. This story is more than a police procedural crime novel, it dances with conspiracy; searching and uncovering the sort of answers that will lead to people being murdered rather than revealing the truth.

This really is a novel for 2016; the world of Vlogging and those that build careers out of creating YouTube videos is such a recent phenomenon. Ruby's character is so interesting - she is lonely and has very few real friends, yet she is "lonely in the glare of 2 million people watching her." I thought it was very thought provoking in a sense as it made me really consider the growing role of social media networks and the affect they could be having on young people and their emotional intelligence or social skills. It highlights the dangers of exposure, the competition and resentment that can grow from a harmless Vlog. YouTubers and Vloggers can create a high level of perfection which can cause as much trouble for them as their viewer. And they seem relatively unprotected from praying companies seeking to exploit or manipulate them.

As the investigation proceeds there are plenty of technical conversations about how people use social media; how the police's work is made more difficult now so many people can hack / delete / wipe information - even though conversely we can also be tracked and traced by innocently opening apps on our phone. Caan's knowledge and research into the details of the technology, the internet and police procedure where vastly impressive and showed a deep understanding of everything he wrote about.

I have more to say...more quotes to use....but actually on reflection, I think they might give too much away. The best thing about this book is the way you are mislead, constantly unsure about some of the characters, shocked and tricked so I think for that reason, the less said the better! What I will say is that this is a very accomplished and considered novel and, as I am finding with all Bonnier Twenty7 debut authors, it is a book which really reads as if it has been written by an established writer with a catalogue of titles preceding them.

The final words of the book left me begging for a bit more! They are as compelling as the opening lines! I hope this means there is more to come from Caan, Kate and Zain.

This story reminded me of a lot of films and TV series I have seen recently in terms of the scale of the mystery and turns that the investigation take - the "grey" morality of a detective and another who carries an emotional burden. There is a lot of police procedure and jargon, and it was probably more intense than most crime novels I read, but even though I wasn't sure if I was always keeping abreast with Kate, I certainly recognise the talent of the author and the potential in this book. Recommend!

My thanks to NetGalley and the publishers for the advanced copy of this book in return for a fair and honest review.