"The Museum of You" Carys Bray 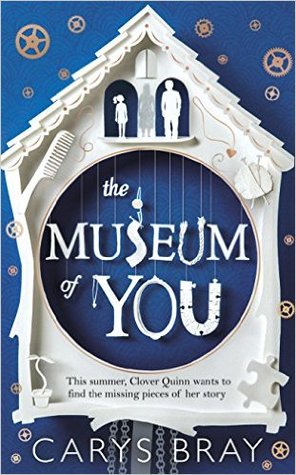 As were many other readers, I was completely entranced by Bray's debut novel "A Song for Issy Bradley" which was one of "Richard & Judy's Book Club Summer Reads 2015" and I rated it 4/5 stars, so I was really excited to get an advanced copy of her latest publication "The Museum of You" which is due out in June. I am absolutely in love with the front cover which I think really captures the beautiful story and character of the protagonist Clover.

The book is about 12 year old Clover, (who likes her name as it has the word "love" in it!) who is being raised by her father, Darren, since her mother died when she was 6 weeks old. Her father is struggling to move on even after all this time and there is a whole bedroom full of her belongings and "stuff" that he is unable to pack up and put away. After talking to a curator on a school museum trip who tells her that the best part of her job is handling the objects in exhibitions as "you get a feeling about them as you hold them....you're looking after other people's stories" Clover comes up with the idea of making an exhibit out of her mother's belongings as a surprise for her father. She can select, label and show the things and then they can be stored and finally put away. I thought this was a lovely and poignant concept for a story and spoke volumes about the deeply caring, loving and interesting character of Clover who also wants to learn more about her own "story" as well as hear more about her mother's life and personality.

Clover is such an endearing character. She is so positive and full of energy. She is gentle, thoughtful and inquisitive.  The book begins at the start of the summer holidays and there is a lovely atmosphere capturing both the relaxing heat and sense of freedom as well as some sense of anticipation and adventure. Bray's writing is highly evocative and full of wonderful lyrical imagery such as "summer coils around her like a cot.....flickering moth-like feeling of happiness ..... waiting for the sand of the six weeks to pass through the hourglass of summer". Clover loves museums and the conversation with the curator was, for me, one of the best passages about curiosity, vocation and the importance of museums that I've ever read.

Darren works as a bus driver and this summer is the first summer that Clover has been given a key of her own and will be left unsupervised while her father works his long shifts. The house is chaotic, filled with numerous piles of eclectic collections of things littering every available space- things that might be useful in the future or hold some vague recollection of the past. The description of the inside was very visual with lots of precise, entertaining detail, effectively revealing the character and lifestyle of Darren and Clover as much as their housekeeping skills. They are such appealing and genuine characters it is impossible not to fall in love with them right from the beginning of the story.

There are lots of references to happiness in the opening pages which alerts the reader that there might be something more hidden to discover; the reader wonders at the reason for Darren's overwhelming concern with protecting Clover and his continuous need to record "happy moments" in case they are "needed later." They end each day listing the three happiest things about the day and "Clover will laugh and it will be another moment he can call on should he need to." Clover begins to notice how he takes the "temperature of her mood and attempts to chart it. He'll stop once she smiles....he inspects her expression like a worried dentist." Darren is a highly conscientious parent. He is trying so hard to be both mother and father to Clover and his attempts to preempt issues or keep up with the modern world of girls are charming and winsome. You cannot help but feel affection for his desperately attentive manner and care for his precious daughter.

"He studied her like a seismologist, on the lookout for waves, trying to map her interior in order to forecast the magnitude and timing of any future quakes.....often mistaking impulse for instinct."

Clover sets about her task of setting up her museum with great focus and concentration. She has make copious notes about how to set up an exhibition and is aware that it should have a very clear purpose - which should contain aspects of  "education, information, discussion, illustration and lots of other "ion" words so there is lots of purpose". She will collect objects from the second bedroom and catalogue them. She will be the designer, curator and keeper. It will be a "temporary exhibition....afterwards the objects will be stored elsewhere." Bray has created a wonderful character. Clover's exhibition will not only help her father to move on but also allow her to learn more about the woman she never knew as currently she feels she is "incomplete and a part written recipe, how can she imagine what she will be if she only knows half of her ingredients." As a 12 year old girl on the cusp of womanhood this is such an important moment in time for Clover and to a certain extent the novel is her emotional "coming of age" journey. In my opinion, Bray and Clover are so similar - both see stories and inspiration in everything around them. Both seek to know and explore "real" things about people, not the obvious. I loved Bray's description of Clover trying to extract more information from the neighbour about her mother:

"She would like to put Mrs Mackerel in a juicer and squeeze the story of her mother out all at once but Mrs Mackerel trickles her comments to sometimes say mean things on purpose."

Clover's exhibition will be the "Untold Story of Becky Brookfield." Through her belongings this "compelling exhibition will give a unique insight into Becky Brookfield (add some unique insights below) Explore a room where she slept. Touch some of her personal items. Other highlights include (think of some other highlights)." Bray convincing captures the voice of a young girl and her pursuit to create a "real" museum. I enjoyed the mixture of "borrowed", "adult" words saved from her research and trips with her child like interpretation and comical efforts to recreate authentic placards. There is a very gentle, subtle humour in the recording of the way Clover adapts various techniques she's seen in practice in other museums which perhaps prevents the novel from becoming too overly emotional or unnecessarily sentimental. Bray's characterisation is so consistent and well managed; so well developed and honed, it shows immense skill, control and impressive craftsmanship.

There is also a lightness added from the comical character of Mrs Mackerel, the elderly neighbour who USES CAPITALS A LOT and offers a different perspective on the family. She is actually very caring but also a blunt voice of full of advice and observations about Darren, his parenting and Becky.

About two thirds of the way through the book, Darren discovers the evolving museum and the novel focusses on his back story, Clover's birth and his relationship with Becky, including the events leading up to her death. It is full of poignancy and so many intelligent observations about people, relationships, motherhood and love that I found myself continuously rereading sentences, phrases and paragraphs, making copious notes of the quotes that I found particularly compelling and bewitching. The beauty of Darren is that he appears to be a very straight forward and ordinary person but actually his insight is acute and intelligent. His comments are sometimes short asides like when reflecting on his grief he says almost flippantly that "people aren't speed bumps, you don't get over them", to more detailed, often quite profound, observations. I found his comment about friendship really resonant:

"One of the surprising things about adulthood is how few people accompany you there and what a relief it is to occasionally talk to someone who knew the child you and the teenage you , someone who had seen all your versions, every update and stuck with you through all of it. That's really something."

I'd like to write that message on a postcard to a couple of special people in my life with whom that comment fits!

He is also bothered by some new parents who he meets on a job. I really enjoyed his glimpse into their irritatingly saccharine life and repellent behaviour. I felt Darren's loneliness and frustration as the woman speaks to him thoughtlessly and narcissistically about parenting which included making her sound like "Jesus, nailing herself to a cross of tiredness." His subsequent subtly undermining action left him (and me) pleased that "he had brushed against her perfect world and smudged it". Bray's ability to capture these secondary characters so deftly and with just a few snatches of dialogue and action is a real sign of her talent. There are several other characters who also are created with real authenticity and conviction. Again, appearing as quite superficial but actually full of depth, understanding and love.

The book also contains a lot of dialogue which I found was always very authentic and real. You could really feel, know and see the characters through their exchanges and Bray also revealed the relationships between the characters through her use of speech. The relationship between Clover and Darren is particularly absorbing and special. They are very close and care deeply about each other. They have a gentle and heartwarming friendship and share in simple pleasures together with lots of running jokes and shared moments of humour. They illustrate a very secure, happy and well nurtured family. They complete a journey independently and together throughout the novel that only brings them closer and to a even more shared understanding. Clover's simple idea about arranging the second bedroom into a catalogue of museum exhibits proves to have quite a profound effect on both of them and their future. It is an inventive and imaginative concept which then allows Bray to explore themes of parenthood, love and grief.

I loved this book. I will be rereading it. I will be recommending it to all my friends and I will be buying multiple copies when it is published. Bray has a true gift for description and capturing characters. She has a refreshing voice which is highly imaginative and creates brilliant characters who really come alive from the page and stay with you for a long time afterwards. Clover's emotions of confusion, grief and love are portrayed sensitively and thoughtfully. Darren is actually a complex character; haunted by ghosts, needing to let go of what could have been to confront what is, and face his desperate need to hold on to the past. As another reviewer wrote, the winning appeal of this novel is that:

The writing is so simple - very readable on the surface, immensely rich and complex underneath. This is a story about love in all its many colours, and tragically, beautifully real – and there’s a proper joyous, hopeful, happy ending too.

If you enjoy books by Sarah Winman, Claire Fuller and Caroline Wallace, you will love this book. It is even better than her debut "A Song for Issy Bradley". 5/5 stars from me!

Why not leave a comment letting me know what you think about this book, "A Song for Issy Bradley" or the cover of "The Museum of You"?