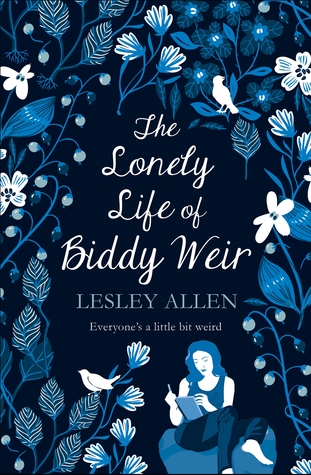 Crime writer G J Minnet ("The Hidden Legacy") posted a picture of the cover of this book on his twitter feed in conversation with another author and then recommended it a few times. The power of Twitter is amazing - from just seeing this attractive cover pictured on my feed a dozen times and trusting in Minnet's judgement, I decided to read this novel. I am so glad I was successful in getting a copy! It has become one of my most favourite reads this year.

There are about three books this year for which I have been desperate to tell the world about but have dreaded writing a review, feeling decidedly inarticulate in comparison to the beautiful writing I've been wallowing in and a definite inability to fully express the effect the author's work has had on me. This is one of those books!

"The Lonely Life of Biddy Weir" is not an easy book to read at times. We first meet Biddy, aged 30, making a telephone call to a chat show running a phone in about bullying. The opening description is full of bird imagery - a theme which permeates the entire novel- and not only effectively captures Biddy's trepidation and emotion at this moment in the narrative, but is also used to illustrate her fragile yet unique and naively innocent personality as the book continues.

"Butterflies as big as bats flapped ferociously in her stomach, thrashing against her ribcage, soaring into her chest.....what if it all goes wrong? What if they catch you out?  ...She tried to ignore the cresecendo what ifs and focus on the dream instead...."

Biddy admits to the researcher, to whom she is first put in contact with, that she suffered psychological bullying for 7 years. When asked what the worst thing the girl did to Biddy was, she replied "I nearly died because of her."

So the stage is set, the reader hooked, the premise established. We then begin "Part One" which takes us back to the small seaside town of Ballybrock when Biddy was two months shy of her tenth birthday; to the moment when the bullying began and she discovered she was Biddy Weir the "Bloody Weirdo"- or simply B W for short. "From this day forward, her life was defined not by her religion, colour of her skin, her sex, the school she attended....but by her oddness.." Biddy is the only daughter of Howard, now retired, who was forced to marry Biddy's much younger mother following a "fumble" and discovering she was pregnant. Biddy's mother left them when Biddy was 6 months old and he has struggled to bring her up ever since. The conventional description of Biddy through her appearance ("curly, unruly red hair ") is helpful but what really captures the reader's imagination (and then their heart) is the description of her clothes and belongings. Her school uniform was either too big or too small. It's never quite right and her school bag is a string shopper with "broken handles packed together with sellotape." Everything is makeshift, broken, drab, brown, grey and old. Biddy is doomed. With a father who is much too old and clueless, her complete lack of self awareness or care for appearance and commodities and to really top it off - a fascination and love for bird poo! Yes, indeed, Biddy is an "individual".

But she is happy. Or has been. Until Alison Fleming arrives at the school. Alison is a "clever, accomplished and manipulative little bitch." What a brilliant line! So up front and so true! And I'm sure reminds us of the Alison Fleming's we've met in the past. Alison is as captivating a creation as Biddy. She will make your blood boil. I could hear her snarling over my shoulder as I read the book. I could see her lips curling unpleasantly at the corner as she glared derisively at the beautifully naive and utterly vulnerable Biddy.

It takes a little while to adapt to Allen's narrative style. She is a master of language and description but at first this is disguised through the simple, childlike manner of writing. However, this understated, innocent voice effectively reflects and mimics not only Biddy's character but I think also reduces some of the impact of the events of which we read. By keeping a more childlike perspective on events it helps to not overwhelm the reader or make it sensationalised or sentimental. It remains raw, real and authentic. It's been a while since I've become so entranced by characters that I feel my pulse rate increase as I read about them and find myself muttering responses under my breath as I see them acting out their role in the novel. I really lived and breathed this story.

Biddy has never been aware that she is different before. She has got to the age of 11 without ever crying. She's carefree. She looks to the sky and birds for meaning and company. She sketches. She's unaffected. As events progress, the depiction of the "halo of sunlight highlighting her wild copper curls....her pale eyes glistening like slivers of broken glass....looked like a miserable angel" is surely metaphorical of something more significant and special within Biddy. But this naivety and frankly, stunted emotional development, is what makes Alison's behaviour towards Biddy even more significant - threatening and dangerous; destructive and fundamentally damaging. All from a spoiled, indulged child with her own significant insecurities and a basic hatred for Biddy spurned merely out of the fact she will not "clamour to be part of Alison's gang of followers". She is an ugly character. Allen really exposes the real mechanics of a bully and the fears which push them to become bullies rather than risking a revelation of their own anxieties and rejection.

Allen's presentation of teachers is interesting. All but one are reluctant to probe in any depth into any nagging suspicion that something is amiss. They don't want to meddle, or open a can of worms. They don't really want to get involved with an oddball and her misfit of a father, especially if it means crossing a perfect student who has rather voluble, wealthy parents. Apart from Penny Jordan the PE Teacher. Penny is so affected by the "heavy mist of persecution" that clings to Biddy that she decides to take some control and help Biddy. It's a beautiful friendship. But, Allen hints that it cannot last and my heart was absolutely in my mouth throughout this whole section, the tension of waiting for Fleming - junior and senior- to destroy any happiness or healing was just so paramount. Oh, oh and oh. There was so much insight in these pages about care, compassion, love, jealously, hatred and downright sadness; I wept.

The novel continues, following a bit of an epiphany or more ethereal experience for Biddy on a school trip - exquisitely written, laden with metaphor and meaning. And then moves into "Part Two" where we meet Biddy as a woman in her mid 20s.

This section is as hauntingly tragic and as traumatic but then, with the introduction of the bright, warm, sensitive and intuitive friendship of Terri Drummond, becomes one of hope, resolution and rehabilitation. Biddy grows both emotionally and physically. "Part Two" is filled with warmth and optimism.

The final denouement is fantastic. I was air punching, high-fiving empty spaces, smiling and wriggling with satisfaction and glee. It is heartwarming, uplifting, with a clear message of healing and hope.

I am reluctant to say anything that isn't exceptionally effusive about this book (did you get that yet?!) but I guess, if forced to, I would say the ending was a little contrived and convenient. However, it was also immensely satisfying and added humour, lightness and resolution that the book needed to stop it from becoming a depressing and bleak tale of a damaged soul. It is in keeping with Biddy Weir's legacy.

I hope this has managed to convey how special this book is. It tackles a depressing topic but through it has created a character of stunning uniqueness. You will be enthralled. It is a captivating read and Allen's prose is impressive. This is her debut and I can't wait to read more of her writing - she is clearly talented and full of imagination and talent.

Finally, all I can say is read it. And may this book be dedicated to all Biddy Weirs. May all of them overcome their demons, survive and learn to live again.

Thank you so much to NetGalley and the publishers for a copy of this book in return for a fair review. I have truly enjoyed it.