"The Girl in the Photograph" Kate Riordan 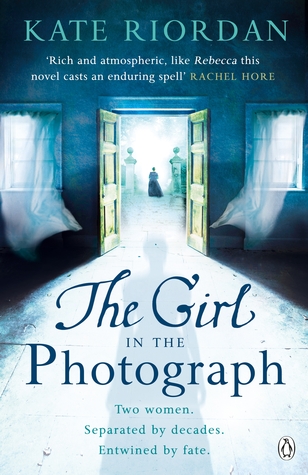 After reading "The Shadow Hour" and completely falling in love with Riordan's writing style and epic narrative story, I decided to look her up and was really pleased to find out she had published a few other titles. I hastily ordered "The Girl in the Photograph" ready to save for my holiday as a real treat!

"The Girl in the Photograph" starts in 1933 with Alice who finds herself pregnant following an affair with a married man who will never leave his wife despite his empty promises. Her horrified and shamed parents pack her off to the remote Fiercombe Manor, under the false pretence of being recently widowed, in order to prevent any further disgrace falling upon her. The arrangement is that she will have the baby adopted as soon as it is born. In the meantime she is under the dutiful care of Mrs Jelphs, the housekeeper. We are then taken back in time to 1898 where we pick up the sad tale of Elizabeth Stanton, wife to Edward Stanton the previous owner of the Manor. As Elizabeth's tragic tale is revealed, it appears to mirror Alice's situation more and more; the stories then weave in and out of each other as each woman comes to terms with pregnancy, love, their pasts and now their futures as mothers.

The dual narrative structure worked really well and alternating between the two voices is an effective plot device. It keeps the story moving and also creates tension and intrigue. It also gives the reader time to draw parallels between the two women as well as having time to process some of the more emotional episodes from Elizabeth's life without it becoming overwhelming. As with "The Shadow Hour", the historical detail is excellent and the settings for both time periods is well established with authenticity and conviction. It is easy to visualise the house and its surroundings.

Alice is immediately struck by Fiercombe Manor. It is welcoming but at the same time there is something mysterious about it. Hints that there is something deeper hidden within the property are conveyed through the more magical descriptions such as "out above me a whirl of dust motes glittered, the sun's alchemy turning each into a speck of gold." Her curiosity about the house's history is further awakened by the discovery of the ruins of another home also on the grounds- Stanton House, and she remembers Mrs Jelphs words that is it "tainted", then "it seems to leach out across my mind, rusty, like old blood". Alice is determined to find out what happened here.

Elizabeth's story is unravelled through her diary which Alice finds, as well as her own narrative and bits of conversation gleamed from Mrs Jelphs and local villager Mr Morton. Mrs Jelphs certainly knows more than she is letting on and sometimes reacts oddly to Alice as if her pregnancy is somehow threatened or at risk. Alice is unsure if she is imagining things and although a little suspicious of her overactive imagination and emotional state, the house seems to be full of echoes and messages for her. Alice is intrigued and excited by the house. She feels as if 'a mystery had presented itself to be solved."

Both women have been poorly treated by the men in their lives. Elizabeth's marriage to Edward is a desperately sad one: "He derived some perverse pleasure from standing away or looking impassively on as she tried to make amends. Once she had learnt to match his coldness with her own it was disquieting how quickly her ardour for him had ebbed away."  She is under immense pressure to have a son and now pregnant again she is terrified of another miscarriage and what might happen is she "failed" Edward again. There is also some mystery surrounding the period of time following her first daughter's birth that involved Doctors and illness, but Elizabeth seems unable to recall anything from this time, apart from the odd half memory. To a degree, Elizabeth is unreliable in her narration of events and observations such as "Edward looked at her as if she were a danger, not just to herself but to her daughter" indicate there may be something more sinister going on making the reader eager to find out just what she has blocked out from the last few years. But, even bearing this in mind, ultimately it is still hard to feel much sympathy for Edward who frequently appears to bully her and show little empathy for her pain and grief. Riordan has chosen an interesting time in which to set this part of the story as it not only allows her to explore the role of women in marriage and motherhood but also the attitude of the medical (male) profession to childbirth, pregnancy and mental health. I found this fascinating and tragic.

With both women being pregnant, Riordan is able to intensify the eerie atmosphere that runs throughout the novel. The unborn babies remind us of their presence with their haunting, ghost like "shifting and roiling", and their "flutters". These references to their movements are a shadowy reminder of their existence, their power to determine the future of these two women and as a constant reminder of the sad circumstances under which they will come into the world. It also allows Riordan to work with characters who are undergoing physical and emotional changes; a heightened awareness of their senses and perhaps more susceptible to suggestions and allusions. Both women as consumed with anxiety and fear for their babies. Alice is torn between what she wants and what it is the right thing to do and Elizabeth lives in terror of not having a boy or losing another child preterm. Both women are mentally and emotionally fragile. The reader is captivated by both story lines and although it is clear nothing can be done for Elizabeth, I willed Alice to survive her confinement and complete her psychological journey as she tries to confront and accept her past and take some control of her future. Alice's enlightenment and her subsequent maturity made this feel like a "coming of age" novel even though she is a little older at 22 years.

There is a lot of trauma, grief and pain in the novel but there is also friendship, hope and love. The final revelations are cunningly kept until the very last pages keeping the reader in complete suspense for as long as possible. This is not a ghost story or a thriller but it is still hugely atmospheric, unsettling, haunting, memorable and affecting. The reader feels compassion for both protagonists and invests in their stories.

This is an absorbing saga in which to lose yourself and become completely immersed in the fabulous setting of Fiercombe Manor which is depicted with such poetical imagery and description. I thoroughly enjoyed reading it while on holiday -visiting stately homes and rambling country estates seemed the perfect environment in which to relish this book! "The Girl in the Photograph" reminded me of "Rebecca", "The Woman in Black", "The Woman in White", "The Secret Garden" and "Jane Eyre". If you enjoy Katherine Webb, Kate Morton and Kate Mosse you will love this novel.