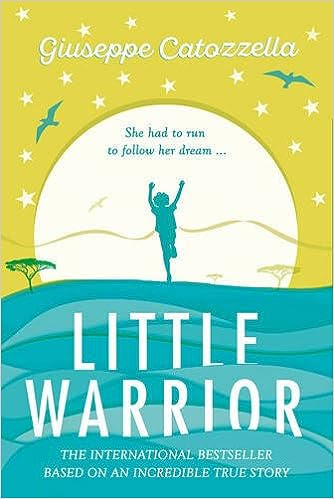 This novel is based on the true story of Samia Yusuf Omar, a Somalian athlete who died on April 2nd 2012 aged 21, drowning while trying to reach the ropes tossed out from an Italian vessel as she attempted to get to England and participate in the London Olympic Games. It is an affecting and heart wrenching story about the determination of one spirited woman who never gave up her hopes or dreams despite the suffering and oppression she faced daily, particularly as she began her dehumanising journey as a refugee.

I was attracted to this book as it popped up on my Twitter feed the same day my friend left for Israel to run a charity half marathon - her first big race, her first flight in twenty years and her first trip away from her young family. It just seemed fitting that I should read this following some of the conversations we recently had. I thought the cover was also quite stunning.

The story begins when Samia is 8 years old and Ali, her best friend born only 3 days apart from her and living in the rooms next to her own family, asks her to be his "sister". Their friendship is deep and bound with the loyalty akin to that of a brother and sister. Ali is described as wearing shorts that were worn by all his brothers before ending up on him, he sleeps and lives in one room with the rest of his family and he is a Darod - an enemy of the Abgals to which Samia belongs. She lives in two rooms with her 6 other brothers and sisters and her parents. They have only known war as it began 8 weeks before they were born and as they race through the streets they barely notice the way the walls of buildings are riddled with bullet holes or demolished by bombs.

Ali and Samia are athletes - runners. Samia wants to be a champion and sleeps with a picture of Mo Farah above her bed. They run at night, through the streets where garbage is burned, navigating their way through charred remains and smouldering heaps of ashes, ignoring the curfew. They avoid the beach as this the militia's favourite spot - they can have a straight shot. As the novel begins with the children at such a young age and seen from their point of view, it almost protects the reader from the full impact of the harrowing situation. It's an accepted backdrop to their lives. As Samia says, "It doesn't matter to us. Let them shoot each other in the street, it had nothing to to do with us. War couldn't take away what was important. Him to me and me to him."

However they cannot remain unaffected by the war and one evening they are stopped by the Militia who turn out to be mere boys of 11, "sporting rifles bigger than they were over their shoulders." The Al-Shabaab use children to teach them about holy war and offer in return education; the opportunity to learn Arabic and the laws of the Koran, a bed, three meals a day. Ali and Samia recognise one of the older boys to be someone they know and this affects Ali deeply. He stops running.

Samia does not. She continues, even more determined to become an athlete, and after a while Ali returns and becomes her coach. Following a further devastating turn of events involving both Ali and Samia's fathers, there is a meeting held at Samia's house. They discuss peace and hope while "outside there was a war." "Promise me," says Samia's father, "that you, an Abgal and you a Darod, will live forever in peace. War is only a result of hatred that makes people blind and content only with blood. We are all Somoli brothers regardless of tribe and clans." Samia vows to become a little warrior; running for peace and to lead Somali women to liberation.

The novel moves forward, several years at a time. The Al-Shabaab gain more power. Life becomes more impossible, particularly for women. Music is barred, cinema closed, men are not allowed to wear shorts and have to shave their heads. Women are not allowed to do anything and had to wear black burkas. "Hopes and freedom had been wiped out in the blink of an eye."

But Samia won't be beaten. She talks to her photo of Mo Farah. She wants to hope. She wants to win. Her first big race offers her freedom and an irresistible euphoria which feeds her desire to succeed even further. Her participation in a competition and the necessary travel it involved becomes symbolic. The running is her freedom. She wins. She is the fastest woman in her country. "I would win the Olympics," she decides, "I would lead the resurgence of Muslim women."

There is some lovely imagery and language used to describe Samia's passion and drive at this point in her story. Words such as champion, glittering, dazzling, celebration and pride scatter the pages. She receives letters from Muslim women and realises she is becoming a legend for thousands of women and their hopes and dreams.

Following her sister's recent journey to Europe by boat, Samia sets out to join her. This is a very traumatic part of the story due to the risks, danger, horrifying reality of people trafficking and the suffering endured. It is made bearable by Samia's inspirational ability to still feel hope and her determination to live. It is a dramatic section; moving, urgent, poignant and tragic.

If you liked "The Kite Runner" and "The Other Hand" you will want to read this book. It is an important story even though it is a hard one to read. Much more so as it is a true story. The closing lines of the novel are powerful.

Thank you to NetGalley for an advanced copy of this book in return for a fair and honest review.