My Review of "The English Girl" by Katherine Webb 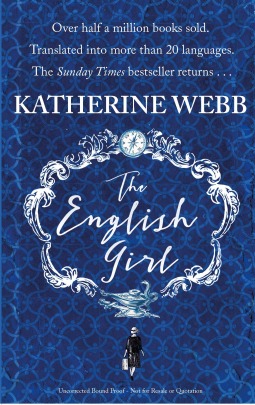 This book took me a while to get into but once I got stuck in, I became fully immersed in the landscape of the desert which Webb so adeptly describes and the complex emotional journeys of the two female protagonists. I made over four pages of notes while reading this which just goes to prove how taken I became with the writing and development of the novel - I promise that this review will significantly condense those notes into a more "bitesize" portion of a review!

The story begins with Joan in 1958 Muscat. Joan, an archaeologist, has fulfilled her lifetime dream to visit the Oman and the Arabian desert. Her brother Dan is stationed in the army there and this is from where they base their visit. Webb subtly implies a slight mystery here as Dan has fallen out with their mother and Joan has no idea why but cannot get him to talk about it. Joan travels with her fiancé Rory although from the outset there are also hints that this relationship is not quite as happy as it appears. They have had a very prolonged engagement and although frequently confessing and showing his love, Rory seems reluctant to set a date for the actual ceremony. Their relationship is also described as one of companionship, of best friends; they are comfortable together in a way established middle aged couples might behave and appear more like siblings.  Already the stage is set for a story of revelation and intrigue.

While in Muscat, Joan is thrilled to visit Maude Vickery, a famous explorer, travel writer and the first western woman to ever cross the desert. She idolises Maude who is now in her eighties; she was her childhood heroine and a constant inspiration. Joan craves the excitement Maude has had in her life. She wishes her life to be "other than she now knew it".

The novel then splits into a dual time frame, stepping back to Hampshire 1890 and picking up Maude's story. It then alternates between 1890 and 1958 as events begin to unfurl. Maude is eccentric and bad tempered and not always very likeable! She holds a bitter resentment towards Nathaniel Elliot, the first man to cross the desert. She questions Joan intensely about his son Charlie, who Joan has met at the Army Base. Maude's comments imply a fierce jealousy, rivalry and a sense of unsettled scores. This is further complicated by the revelation that they grew up together and Nathaniel was sponsored by Maude's father throughout his childhood.

Maude has a huge sense of injustice and sense of failing despite Joan's assurances that to be the first woman to cross the desert at the turn of the century is an incredible achievement. "The desert changed me. it changed everyone." This concept that the desert holds this enlightenment and elucidation is very powerful and is repeated throughout the novel. The sheer magnitude and solace of the desert is described with effortless beauty and vivid imagery. Webb's writing during these passages was so alluring and bewitching that it completely illustrated the spell it was capable of casting and why Maude and Joan had become so obsessed with it. The "brutal mountains rid notions of walls closing in" and Joan's "heartbeat slowed to keep time with some invisible rhythm of the world around her." I jotted down numerous phrases that I found stunning or seductive but will restrain from sharing all of them for fear of ending up with an A Level essay analysing style and language - it would surely be a brilliant book to use for this!

Joan's time in Muscat becomes more of the adventure she so craves when Maude asks her to visit her servant's son Salim who is imprisoned for his political thinking. This reminds us that this is a dangerous country, one of political unrest and violence. Joan has to travel in disguise as an Arab woman and she finds the experience exhilarating. She makes several visits and the conversations that take place are spiritual and enriching, adding to Joan's journey of self discovery. I particularly liked the story of the "Gareen" who is a companion who walks through life on our shoulder. "We are not supposed to know the way....it does us no good to know the way of our life.... we must only live as we may." Salim advises Joan that "we are none of us helpless unless we choose to be" and this is another important theme in the book. Both women are thwarted by convention, society and men. Both women are ambitious, driven and desperate not to be second place or left behind "which made Maude so desperate," but come up against not only the barriers of their time and also the exploitation of their hearts and emotions. "You don't need to play the cards you've been dealt," Maude tells Joan, "Marriage is not your adventure."

However Maude has old scores to settle. Unwittingly, Joan mistakes Maude for a friend and is drawn into something darker and more dangerous in her own search for self discovery and adventure. She is pulled into something beyond her control. The last third of the book is a dramatic and page turning read, heightened by the brutality of the desert, its "precipitously steep banks," it's vast, undulating mass which has such a profound physical and emotional impact on the characters. It shows you should never underestimate a woman, particularly not a woman in a man's world.

This book is about changing your destiny, confronting the past, self discovery and atonement. It is about retribution and reprisals. It is about siblings, lovers, marriage and women. It is about potential and happiness, distortion and clarity. All set within the extreme, exotic location of Arabia and the desert which changes everyone and everything. As Joan observes, she was moved by its "hugeness..the multitude of it was dizzying" which is an appropriate summing up of how the scenery mirrors her own awakening.

Webb has clearly researched both time frames thoroughly. This historical and political detail is extensive. It does not take over the plot - which remains very people centred - but enhances the tension, suspense and plight of the characters.

This is a saga of a novel for you to become lost in and transported to a different world and a different time. It is well worth a read. I will be looking for Webb's other books now! Enjoy and relish it!

Thanks for reading to the end of this not so "bitesize" after all review! My thanks also to NetGalley for an advanced copy in return for an honest review.