The Guilty Mother by Diane Jeffrey 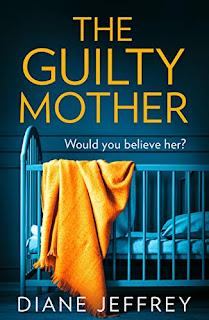 This is a novel that doesn't shy away from an emotive and controversial issue. A mother, Melissa Slade, was imprisoned in 2013 for killing her twin baby girls. Now, with new evidence, her case is reopened and it is journalist Jonathan Hunt - who covered the story in 2013 - who is tasked to interview Melissa. Will he be able to find out whether she is in fact guilty, or has been a victim of a terrible miscarriage of justice?

There are lots of reasons that make this book a great read. Firstly the subject matter - a mother being imprisoned for murdering her children is a huge topic and a very sensitive and emotional one. But it also instantly engages the reader and creates a real sense of intrigue. Within this murder case there are many questions to answer and many themes to explore - all of which Jeffrey takes the time to do and because of this has crafted a multi-layered, thoughtful yet well-paced novel.

I liked that the protagonist of the story was really the journalist and in a way, this made Melissa Slade's circumstances less sensationalised  - or more authentic - and allowed Jeffrey to explore the characters, their motives, their relationships and the consequences in depth. Jonathan is reluctant to take the case on, initially it takes him a while to remember the details (a great way to fill in the backstory for the reader as well!) and tragically also ignites challenging feelings about his personal life and the situation he is struggling to fully come to terms with. I liked that he was a journalist rather than a policeman as I think that also allows more leniency and creativity with the investigation and how the character of Melissa was revealed and presented. I liked how the personal lives of both Melissa and Jonathan were intertwined - but not in an obvious way, more nuanced, showing how much what we are going through can affect the way we react or deal with everything else around us.

The story soon develops - not only do we learn more about Jonathan, but obviously we start to uncover much more about Melissa. Jeffrey plants clues, makes suggestions, sows seeds of doubt, then throws in a few twists and other pieces of information so we really don't know whether we believe Melissa or not. We are torn, we want to feel empathy towards Melissa but then we are not sure we can trust her. There is quite a large cast of characters as Melissa is on her second marriage and there are several family members involved in the events leading up to the death of the babies, but Jeffrey manages each thread well and ensures the constant drip drip drip of information comes just at the right moment. The novel is full of tension, suspense, intrigue, confusion, conflict and distrust. And a whole lot of emotion. Whatever the outcome, this is a truly tragic case and cannot fail to affect the reader in some way.

Despite choosing a challenging and uncomfortable subject and then the further sadness of Jonathan's home life, this story is a good read. It's well written, thoughtful and sensitive. It feels authentic and the characters felt real. I really enjoyed the final section of the book and loved the last minute twists and turns that were really satisfying and needed an audible gasp of shock!

This is a great thriller. Complex and perfectly executed to create a compelling read where the reader really doesn't know what the outcome will be and what they can believe about the characters. Recommend!