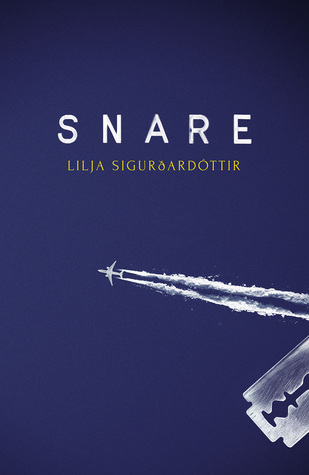 If you only read one book this week - or month! - make sure it's

Ok, so this book is about cocaine smuggling and the Icelandic financial crash. The main character is Sonia, a single parent coming out of a messy divorce who starts a relationship with another woman, then finds herself caught up in a criminal world, becoming further embroiled in a dangerous game when all she really wants is to provide for her son. One of the other key characters is Bragi, a customs officer working at Reykjavik Airport who has to use all his years of experience to try and uncover the drug smuggling he knows is going on there.

Yes, exactly. Wow. So take a breath, because once this novel takes off, you'll not breathe another breath until you've finished the last page!

This novel is punchy, fresh, daring and original. This is a thriller unlike anything I've read recently.  It seems to transcend genres. Not only is it exciting, dramatic, dangerous and edgy, it includes the sophistication and deception of financial crime, the violence, threat and danger of drug crime, and it also includes the emotional issues and complications in relationships, marriage and parenting. And all of this is presented in crisp, fresh, punchy and original prose.

The writing is as breathtaking as the storyline. Somehow, Sigurdardottir has written a short, concise, taut novel that is action packed but also very character driven. From the very opening scenes, we are with Sonia as she makes her way through customs smuggling the drugs and we are involved in all the detailed planning, carefully constructed coincidences and the nerve wracking moment when we see if she makes it through or not. I don't think I've read an opening so compelling or fascinating in a long time.

As the novel continues we are invited to watch how these characters operate under pressure as the worlds they have tried to construct and carefully hold in place through lies and deceit, start to become more threatening, more ominous and more dangerous. I enjoyed watching the impact and fall out affecting each character as much as wondering what they might do next. Sigurdardottir has written about two very different kinds of crimes with a very real sense of threat and the characters are as fascinating as the crimes they are committing. The relationships and dynamics between the characters are intense and the author is clearly a shrewd observer of people. The interaction between Sonia, Agla and Bragi shows the writer's incredible skill for depicting convincing characters and for crafting refreshing and original protagonists.

I think the character of Sonia is ingenious. The detail in her planning, risk assessment and ability to recalculate a situation at a moments notice is beyond impressive; her imagination and bravery have to be admired. I loved reading about how she became invisible once in the airport and how she learnt to avoid any attention in order to evade the observant eyes of security and custom officials. She is driven, bold, hard but also her prime concern is her son. Despite how this blurb may read, she is believable, realistic and it is not that difficult to see how she has fallen deeper and deeper into a life threatening situation.

I also loved Bragi, the customs officer. I loved watching him at work. The world of the airport is incredibly well created. I liked his observations and I absolutely loved the unexpected twists and sudden spike in tension that his character brings to the final section of the novel.

Snare is about drugs, smuggling, fraud, financial risk yet also relationships, characters and love. There is an ever present atmosphere of danger and threat but the characters are as compelling as the unfolding drama. The writing is succinct, focussed, clean. I'm at a loss as to how to describe the book effectively because I was gripped by the tension and drama but also found the considered, understated, straight talking prose very powerful.

If you're not sure about reading this, if you usually prefer psychological over crime, I would urge you to read this. Sigurdardottir is something special. There is so much more to this novel; this is impressive writing, imaginative storytelling and quite simply unique.

Snare was published by Orenda on 4th October 2017.

I was lucky enough to buy a copy early at the Morecame & Vice Crime Writers' Festival and get it signed by Lilja herself! 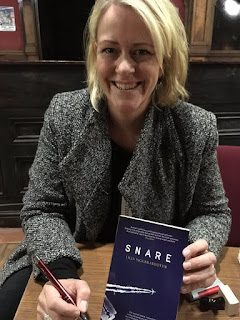