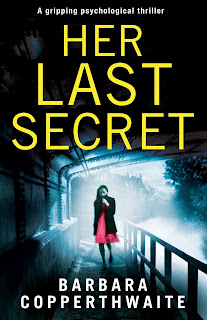 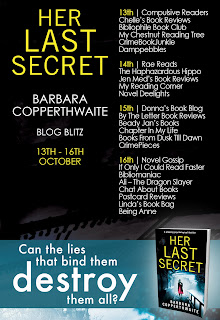 HER LAST SECRET
by
BARBARA COPPERTHWAITE

There are some secrets you can never tell.

The last thing to go through Dominique Thomas’s head was the image of her teenage daughter’s face and her heart lifted. Then the shot rang out.

Her Dark Secret is about the Thomas family; Ben, Dominique, their teenage daughter Ruby and their younger daughter Mouse. They seem to have it all. Success, wealth and emotional stability. But, as all of us who love a psychological thriller know only too well, appearances can be deceptive.

Copperthwaite starts the novel by introducing the crime scene. We know it happened on Christmas Day. We know there is a lot of blood, we know a brutal crime has taken place - one that shocks the police called to the house where some harrowing tragedy has occurred. Immediately this builds tension as the reader is then taken back in time and shown the events that lead up to this horrific crime scene. The novel then moves forward in almost chronological order with a few chapters from the present day police investigation taking place on Christmas Day. This means there are revelations not only from the characters' narratives but the revelations from the police findings also increase the suspense, moments of surprise and intrigue.  Copperthwaite manages both story lines with such a perfect adherence to pace, tension and dramatic effect. They never seem to overlap, only add complication, but gradually things start to converge with a crescendo that is exciting, impressive and completely breathtaking.

What makes this novel so fabulous is that the reader is constantly having to reassess their opinion of each character and reconsider who might be responsible as the police uncover the victims. At times it reminded me of a game of Cluedo, or a Christie novel as we know the crime, we know the characters involved, but we are not entirely sure which ones are the victims and which are the perpetrators. As the story unfolds the links, issues, problems and concerns that exist between them develop and deepen and suddenly it seems that each of them could be responsible for causing murder - each have a motive, each have the potential to act on their emotions and each could be dead. It's very clever.

I also love Copperthwaite's characters. They are all well crafted. Some gain our empathy, some gain it and lose it, some leave us not knowing how to feel about them and some quite frankly are not worthy of our empathy. Each voice is distinctive, authentic and with palpable emotional reactions to situations and other characters. The way the characters impinge on each other's lives is also very well done and once again, executed with great accomplishment. I liked that every character might make a slip or error that showed they might be capable of carrying out a murder but then our instinct was never to really believe them capable until the point when things become so desperate that actually, may be each of them does have enough anger, fear, jealousy, guilt or frustration to commit a deadly crime.

Her Last Secret is so readable and well written. It's easy to visualise, compelling and evocative. I particularly noticed the number of times 'hate' and 'kill' were used and how Copperthwaite used these words to great effect. Everyone says "I could kill them" flippantly, but what if this flippancy becomes a truth or the level of emotion behind the sentence is ignored or not taken seriously and the person actually is stating an intention. "Hate" and "Kill" are simple, blunt, short words and their repetition was very effective in highlighting the bleakness and darkness in this novel. I think her use of "the shot rang out" - sometimes considered a cliche in crime fiction - is used for huge dramatic impact and other comments such as characters putting on '"the mask of normality" showed real insight into human nature.

There are some really interesting issues explored in the novel. Sleepwalking, trauma, self esteem, bullying, infidelity, financial problems and disastrous business decisions mean that this really is family noir. But the number of layers, different plot threads and character flaws are so well written and so well woven together this is a truly gripping novel that cannot fail to hook in every reader that picks it up.

I have to say that the ending was truly thrilling. I was literally unable to breathe or turn the pages fast enough. Knowing half of the outcome of the story was heading made it even more captivating as events hurl towards one of the most masterfully delivered denouements I have read for a while. The countdown to Christmas Day ensures that a high level of anticipation is maintained throughout the story, and as the day fast approaches I kept panicking as so much was still unresolved, still spiralling out of control and, to me, there seemed to be so many potential endings I could not wait to find out what was actually going to happen.

When a book carries the blurb that it is for fans of "The Girl on the Train" I can be a little sceptical but do you know what? Forget "The Girl on the Train", this is the psychological thriller you want to make time to read! Her Last Secret is dark, compelling and as thrilling as any of the big crime fiction hits this year and it deserves the comparison. Utterly breathtaking. Full of heartfelt characters, emotion and a complete roller coaster of a ride. The only secret you need to know this year is that Barbara Copperthwaite is a writer to watch out for.

Her Last Secret was published by Bookouture on 13th October 2017. 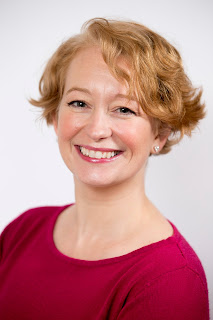 What people say about Barbara's books:
"Will have you looking over your shoulder and under your bed... Original, gripping, with a deep psychological impact," Sunday Mirror
"Enthralling, tense and moving," Real People magazine
"Totally gripping, and scarily believable," Bella magazine

Barbara is the author of psychological thrillers INVISIBLE and FLOWERS FOR THE DEAD. Both have been Amazon best sellers. She is also the author of THE DARKEST LIES, and her latest book HER LAST SECRET is out on 13 October.

Much of her success is thanks to her twenty-odd years' experience as a national newspaper and magazine journalist. She's interviewed the real victims of crime - and also those who have carried those crimes out. Thanks to people sharing their stories with her, she knows a lot about the emotional impact of violence and wrong-doing. That's why her novels are dark, realistic and tackle not just the crime but its repercussions.

When not writing feverishly, she is often found hiding behind a camera, taking wildlife photographs.