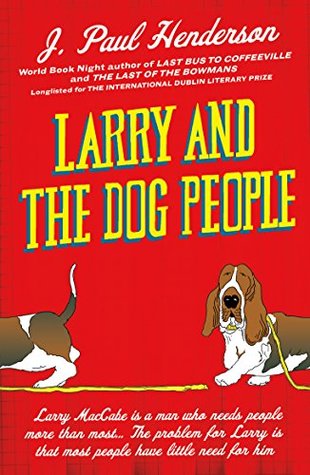 Larry MacCabe is a man who needs people more than most ... the problem for Larry is that most people have little need for him.
Larry MacCabe is a retired academic, a widower, and until a chance meeting with the administrator of a care home, also friendless. At her suggestion he adopts a Basset Hound and joins her one Saturday at Georgetown’s Volta Park. He becomes a regular visitor, and for the first time in his life the member of a gang.

While his new companions prepare for the annual Blessing of the Animals service on the Feast Day of St Francis, Larry puts the finishing touches to a conference paper he’s due to present in Jerusalem and arranges a house-sitter. Neither the service nor his visit to Israel go to plan, and on his return Larry is charged with conspiring to blow up a church and complicity in the deaths of four people. All that stands between him and conviction is a personal injury lawyer – and things for Larry aren’t looking good...

This was a book that is quite hard to define in terms of which genre it falls in to but not a hard book to define in terms of how much I enjoyed it! There's a lovely narrative voice which captures Larry's personality effortlessly. His character is well established with the prose reflecting his endless chatter and inadvertent humour. I was very entertained by his adventures.

The opening had some likeness to A Man Called Ove or Harold Fry except there is nothing cantankerous about Larry, he loves people, he loves sharing and he loves chatting. He's unique, vividly captured through the author's gentle description which teases Larry while at the same time encouraging the reader to become very fond of him.

"Larry assimilated information as easily as blotting paper absorbs ink, and nothing, absolutely nothing, escaped his interest."

Initially I thought Larry might be a character that sought pity but he is so positive and his interpretation of events always allows him to spin things to his advantage that there is no need to do anything except sit back and enjoy the story. I'd love to share more "Larry-isms" and quotes from him as he is so knowledgeable, fascinating and inadvertently entertaining but as Larry often uses one hundred words when maybe ten would have sufficed and sometimes there are several paragraphs building up to the best line, it would be far too time consuming and take up too much space. Just read the book and discover for yourself!

But joking aside, there are serious issues with the novel and there is a crime. There is terrorism, bombs and threatening characters. Larry somehow wades right into the thick of it all and things begin to get complicated. The author handles the various different threads with ease and manages his storyline effortlessly, bringing everything together in a clever and masterful conclusion.

I found this a light, entertaining read. Although there are some undesirable characters and some dangerous events, there is a good mix of drama, crime, politics and humour which make it quite a unique read and not something I would usually pick up, but I am very glad I did!

Larry and the Dog People is published by No Exit Press on 27th July 2017.