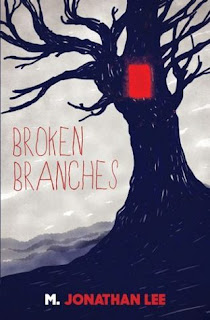 
'Family curses don't exist. Sure, some families seem to suffer more pain than others, but a curse? An actual curse? I don't think so.'A family tragedy was the catalyst for Ian Perkins to return to the isolated cottage with his wife and young son. But now they are back, it seems yet more grief might befall the family.There is still time to act, but that means Ian must face the uncomfortable truth about his past. And in doing so, he must uncover the truth behind the supposed family curse.

Excellent. This was excellent. An isolated cottage, family secrets, trauma, grief, death, a curse and poetic, mesmerising language. Who could ask for more?

There has been a huge PR campaign surrounding this book from Hideaway Fall and so I began this book with some feeling of trepidation but literally only a few pages and in I found myself completely drawn in to Ian's world and quite captivated by the writing.

The novel centres around a tree in the garden of the family home and the 'curse' that it seems to hold over the family who live there. I loved the description at the beginning which captures not only the atmosphere of the novel but also the sense of unease and intrigue surrounding the family and this house.

"The tree reminded him of an upturned witch's broom. ....Thick individual branches tapered high above, threatening to sweep away the yawning sky...... There were many nights were the moon cast shadows on the wall above his bed and the tree's branches - like fingers - silently scraped and scratched the wallpaper above him..."

The story then moves forward and backwards through time, recounting the love story of Rachel and Ian when they first met and showing how deeply they were in love and how much seems to have now changed between them. There is a continuous sense of mystery and intrigue as the portrayal of the characters is now so different, the reader wants to know what has happened to them to affect this change and what is going to happen to them in the future as they seem to be stumbling along on a path where they're drift further apart. We also learn more about Ian's childhood, the traumatic events that unfolded around him but that he was only partially exposed. This means there is a sense that both the reader and Ian are trying to link all the clues together and separate the myth from the truth, the stories from reality.

This theme between the difference of what is seen and what is not seen but believed, what is said and what is heard, what is hinted or suggested and what really happened is central to the plot and very cleverly managed. All through the story we are trying to piece together one mystery - or one version of events - only to find that we have been completely distracted from what is actually happening. Ian is also so consumed with his researching his family history, sure that he will find some answers by searching through the paperwork in the house, reading diaries, letters and asking people about what really happened between his father, his uncle and his brother that he too can not confront the reality of the present.

I thoroughly enjoyed the ghostly atmosphere and the chilling description of the tree. I was intrigued by the harrowing events that Ian witnessed, the threat of a curse and the unhappiness that now engulfed himself and his wife.

I really enjoyed Lee's prose and found it full of effective imagery, full of subtle hints, half suggestions and well crafted characters. Having now read the whole book I'm tempted to go back and search out the clues I missed! The last few chapters completely pulled the rug out from beneath me and made me question all I had read before. I wasn't expected such a turn of events - I want to say twist but that feels a little bit of a disservice to the writer as I think it is something more subtle than that - more of a dawning of the truth.

This was an incredibly satisfying read. It was emotionally raw at times, it was full of sadness and misunderstanding and it was full of ghosts and the lingering threat of something more malevolent.

A top read. One that reached out and caught me in it's thick, strong branches, not letting me go until the final line when I was released, left staring at the last words, waiting while all that I had read settled like falling leaves into place, waiting for each branch of the story to fall still.

Broken Branches is published by Hideaway Fall on 27th July 2017.

As I mentioned earlier there was a great marketing campaign from Hideaway Fall all about finding a hideaway to read your book. Here are some of the photos I added to the twitter campaign for imaginative reading spots! 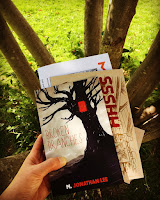 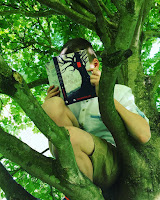 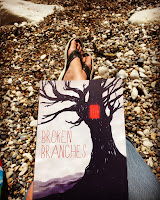