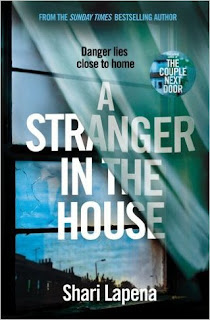 You come home after a long day at work, ready for dinner with your wife.But she's not there. And it looks like she left in a blind panic. Her mobile phone and her bag are still in the house.You fear the worst. You call the police.And they tell you that your wife's been in an accident. She lost control of her car as she sped through a street on the worst side of town. But why would she go there? Was she running towards something? Away from something?

This is a very well written, well structured and well executed novel about identity, consequence, revenge and love. Just as in her first novel, Lapena tells a story that presents one view of what has happened only to go on and challenge us to rethink everything we thought we knew about the characters and what has actually happened.

The book is immediately compelling as it opens with a husband who cannot understand the actions of his wife and a wife that cannot remember why she behaved in the way she did. Why did Karen suddenly leave the house without her phone or wallet? What made her leave in the middle of cooking dinner? Why did she drive across to a less desirable end of town and how did she end up wrapping her car around a utility post? All these questions and only in the opening chapter! Reader, prepare yourself. This is just the beginning of the questions that you'll be wanting the answers too - and you won't be alone. Not only do Karen and Tom, the husband and wife at the centre of the story, want the answers as much as you do but also so do the police. And the neighbour Brigid.

Tom and Karen Krupp live in a 'quiet, prosperous suburb in upstate New York' where everyone is successful and settled and 'a little bit smug'. I really enjoyed this description and I like that Lapena chooses characters who have everything going for them, characters who never expect to have police cars endlessly pulling up on their drive, being arrested for murder, challenged and their pasts raked up in front of the neighbours. It's a great hook to choose characters who thought they had everything under control and their secrets - however big or small- tidied away from each other, suddenly finding their lives upended and the truths that they and worked so hard to bury brutally exposed.

Lapena's writing is incredibly readable and unputdownable. She has a real knack for creating characters who you feel sympathy for and take to but there is something about them that you question or feel unsure about. I really liked Brigid as she was so menacing - in what appeared a harmless way but became more threatening as the novel progressed. I felt a little sorry for Tom as he seems genuinely caught between a rock and a hard place but both he and Karen have told each other so many lies - not always big ones, but ones that make it very hard for them to face the present situation they find themselves in.

Karen is a very well crafted and very carefully presented character. A woman with a past. A woman with the determination and intelligence that doesn't fully reveal itself until the very end but oh my word, when you work her out it will quite frankly take your breath away. Lapena shows off her skills at managing a great storyline, a great character and a fantastic denouement.

Sadly I can't say too much without spoiling the story except that you need to watch Rasbach as he is determined to solve the mystery behind the car accident and the murder that he knows must be linked. His persistence to keep pushing Karen, Tom and Brigid ensures that the reader gets some of the answers they want and his role also adds to the layers of tension and suspicion.

This is a clever novel full of unreliable narrators, characters with conflicting motives, secrets and dark pasts which are putting them under increasing pressure. I thought the writing was very fluent, very engaging and that there was much more to this novel than a straightforward family noir thriller.

Highly recommend. Just like her characters in this novel, Shari Lapena is one to watch.

A Stranger in the House is published on 27th July by Transworld.