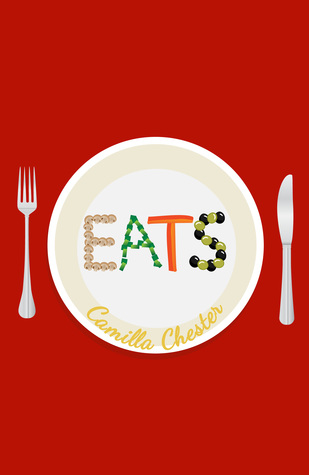 "A delicious story with all the best ingredients - friendship, fun, adventure - and a bone-chilling twist." Helen Moss, Author of Adventure Island Series

When best mates Lucas and Tucker win a competition to cook with celebrity chefs everything comes to a boil. Can they stir up trouble and serve the just desserts in time?Set in the present day, EATS is a culinary adventure tale for children aged 8-12. It is full of twists and turns that will have kids on the edge of their seat.

EATS was published on April 29th 2017 by Matador and is available to buy via this link: Buy Camilla's Book

On Saturday 29th April, I had the pleasure of attending the launch of  Camilla Chester 's second book, EATS, at the Oddfellow Arms Harpenden. It was a really lovely event - the sun was shining and as we arrived in the pub garden, we were greeted by the sight of several young readers sat at the picnic benches glued to their brand new copies of Camilla's eye catching book!

And just as eye catching as the cover were Camilla's painted nails -which matched! 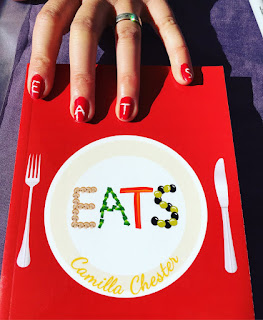 My daughter enjoyed getting a personal message from Camilla written inside her copy of EATS - she was thrilled to get her first signed book and I'm very hopeful that she is inheriting my book addiction and love for meeting real life authors! 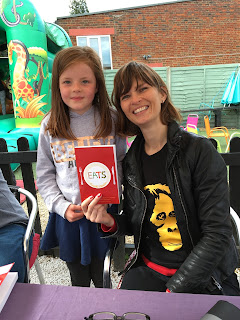 The event began with a bit of an award ceremony - Camilla announced the winner of her competition to name the dog in her third book. Some of the top suggestions had been Popcorn, Ketchup and Mischief but the winning name was Fuzzles! Look out for more competitions and more information about Book 3 on Camilla's website! 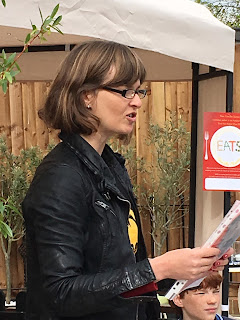 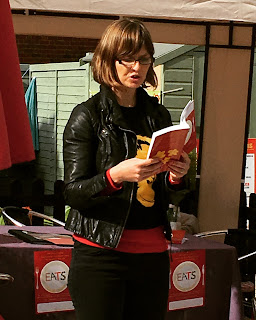 Camilla read an extract from EATS and then spoke a little bit about the novel- although there wasn't too much she could tell us about the inspiration behind the original idea and what EATS stood for without giving away the big twist! We were then treated to a delicious selection of vegetarian nibbles (if you read the book you'll understand why this is relevant!). Camilla also had the original colour illustrations for the novel drawn by the talented Annie Harris which were a real treat to see! 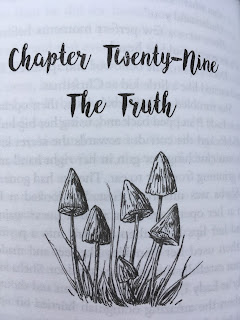 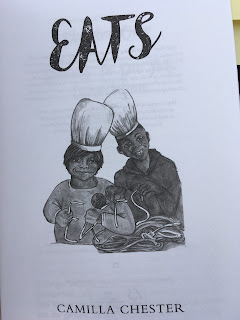 Thanks to Camilla Chester for inviting myself and my daughter along and for such a relaxing afternoon nibbling tasty snacks, enjoying a drink in the sunshine and listening to a fun extract from the book! If you want to bag yourself -or any minibibliomaniacs you may know- a copy of EATS then head over to Camilla's website. If you buy directly from Camilla then you have the added bonus of being able to request a signed copy! And for anyone who lives in Harpenden, you can always pop around to Camilla's house to buy your book, avoiding postage and getting to meet the author in person!

And here's a teaser from the opening chapter of EATS to wet your appetite!

On the slightly smelly sofa, in the run-down common room of Brocken House, Lucas Larks sat transfixed by the TV. The screen was filled by celebrity chef, Leonardo De'Largio. Bulging out of his dinner jacket, his white-streaked hair combed up and back with waxy grease, the chef looked like a fat badger. Lucas thought Leonardo was the greatest, because no matter how much cheese Lucas are he would never, ever be as big as him.

The famous chef had a weird way of talking. It was his Italian accent, but sometimes he muddled up words too. Lucas like that he wasn't perfect.

A competition on Dinners to Die For? This could be awesome, thought Lucas.

"Budge up Larks, you big fatty," said Tucker elbowing Lucas in the ribs.

"Shut it, Turkey," Lucas snapped back, shifting over a bit to make room for his best mate. "Can't you see the Big Man is talking?" He jabbed a pink thumb at the telly. "Dinners to Die For is doing a competition."

Tucker went quiet and stared at the screen.

"It's time for you to show us what you can do," Leonardo continued. The other two celebrity chefs that starred on the show were standing behind Leonardo nodding their heads. "Two lucky winners who enter the best short film showing themselves making their own Dinners to Die For will come to Mouthful Mansions, to cook with us for a whole weekend."

Lucas's stomach churned. This was it!

If you want to find out what happens next - whether Lucas and Tucker can make the best film, make a Dinner to Die For and win a weekend away at Mouthful Mansions, then head over to camillachester.com and order your copy of EATS now!

Camilla's first book Jarred Dreams was published in April 2016 and is about twelve year old Sade who moves to a new town where something is very very wrong.... 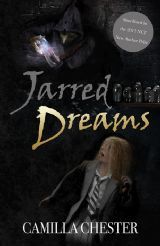 If you want to read my review of Camilla Chester's first novel Jarred Dreams, then click on the link below. Jarred Dreams is available to buy on Camilla's website as well as following the amazon link here

MY REVIEW OF EATS by CAMILLA CHESTER

This is a really fun story about two best friends and their quest not only to escape the boredom of their children's home Brocken House, but also to become world class chefs. For any children who love Masterchef, Britain's Got Talent, The Great British Bake Off or have any aspirations to win a competition that may change their life, then this is the story for them!

Lucas and Tucker are great characters; they are the underdogs but they never give up on their dreams. Lucas is imaginative, creative and a boy who will not be slowed down by bullies or any problems that stand in his way. He has a dream and he has determination. He knows that no one is going to adopt a "pudgy eleven-year-old boy without freckles or dimples or anything cute" and although his best friend Tucker is the worst cook in the world, Lucas works out a cunning plan to ensure they win with a meal that will impress the judges. They set about using the few resources - and slightly stale food- that they have access to and create a unique meal to attract the attention of the mighty Leonardo.

I enjoyed Chester's writing and enjoyed how the theme of food and cooking permeated through the pages. At one point Lucas wakes up to find his cheek flattened "as if rolled out like pastry" and his mouth "as dry as a cracker".

Chester's writing is lively and engaging, drawing on the tradition of Dahl and Lemony Snickett. When the reader arrives at Mouthful Mansion they are greeted by a cast of characters who are colourful and very entertaining. The dialogue is well paced, adding energy and vivid detail to the characters and the scenes. I liked Lady P a lot - she reminded me a bit of Cruella De'Vil and Miss Trunchball. Chester doesn't miss an opportunity to make the reader smile with her choice of names for people, places and meals - something which is sure to appeal to her audience and any adult who reads along with their minibibliomaniac.

As well as entertaining us with characters that successfully tread the line between being larger than life but believable, Chester also has a great story to tell. There is plenty of action, tension, suspense, mystery and adventure. There is a tasty twist and a delicious dramatic denouement.

This book has all the ingredients for a perfect children's novel. It will satisfy any avid reader who maybe hungry for a good story and strong characters. I recommend it!