"Behind Her Eyes" by Sarah Pinborough 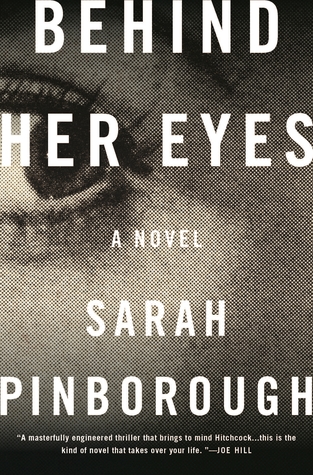 Why is everyone talking about the ending of Sarah Pinborough's Behind Her Eyes?

This has to be one of the most anticipated releases of 2017 so far. The marketing has been tantalising and it has literally been one of the most talked about books on social media for a while. It's been bold in its claims and with a promise of an ending that will completely blow you away, I was thrilled to get an ARC of this book and more than just little curious about the story.

Meet Louise. A single mum with a four year old son Adam. Stuck in a rut. Getting by. Managing on her own while her ex-husband remarries and begins to start a new family. On a rare night out she meets a man at a bar, sparks fly and suddenly she is filled with hope that she has finally connected with someone again. Until she gets in to work the next day and realises this man is her new boss, David.

And David is married. One morning, Louise bumps into Adele, David's wife, and they become friendly. Louise can't help but become drawn into their world and their marriage-split between her attraction for David and her fondness for Adele who seems to be hiding something. Soon she realises their marriage is not perfect and not as idyllic as they try to pretend. Soon she is caught up in a tangle of complications as she tries to figure out just what is going on between them and then things start to take a deadly direction.

The novel is told in alternating sections hopping between the first person narratives of Louise and Adele, and then a further narrative from Adele, this time in third person from the past.

Adele is an intriguing character from the outset. She is desperately in love with her husband and does everything to make him happy.

"I love my husband. I have since the moment I set eyes on him, and I will never fall out of love with him."

But even though she does everything he could wish to look after him, even though she appears to have dedicated her days to domestic chores and looking after her appearance to please him, she reveals that things are not right.

From the outset it is clear that there is a dark secret behind this couple's marriage. We just need to try and figure out what it is but even with Louise's help as she becomes Adele's confidant and spends more time with both David and Adele, we find ourselves becoming more confused by David's changing personality and concerned about Adele's emotional state of mind.

Pinborough then goes on to weave a masterful story full of suspense and tension, never quite giving us enough detail to work out what is really going on, ensuring that every time we think we have worked something out, she throws in another revelation, another confession or resolution from one of the characters. The success of this story is that we are as drawn in as Louise and as intrigued, concerned, fascinated and frightened by the characters as she is. Pinborough starts off with a story about an affair and a jealous wife and then transforms it in to something more astounding, successfully sustaining intrigue for the entirety of the novel and keeping a few jaw dropping twists until the very final pages.

I must admit I was wholeheartedly captivated by Adele's character and she reminded me of other literary characters who have equally fascinated me. I liked her duplicity, the carefully planned projection of what she wanted to people to think of her versus the callous manipulation that lies behind it. The third person sections also reveal a traumatic past and show us that Adele has suffered, struggled and then survived harrowing events. Although again, Pinborough drip feeds this story, still not quite giving us enough information to work out the whole context of Adele's past and why she ended up receiving therapy for so long.

But I also liked Louise and the novel certainly needs a more relatable, real character who is ordinary - flawed but ultimately well meaning- who is just trying to do her best despite her own feelings of inadequacy, anxiety and a propensity to over think everything. Louise also suffers from terrible night terrors. Her dreams are vivid, highly distressing and leave her exhausted and fragile.

I enjoyed the mounting tension which is created through several narrative devices and plot twists.

Firstly we have Louise coming to terms with her own failed marriage, her personal situation, her feelings for David and her confusion about the man she knows and the man Adele is married to. Louise is likeable, she has our sympathy and support. She doesn't always make the right decisions but she is only human; loneliness can affect the way people respond to the lure of friendship and the offer of love.

Then we have Adele. We are not sure whether she is a fragile woman who is has become completely dominated and controlled by her powerful husband to which she owes her life and to whom she seems bound to forever by some deep secret in their past.

And finally David. Is he the lighthearted man who Louise met in the bar that night and finally shared laughter and bright conversation with? Or is he a husband who has fallen out of love with his wife and seeks to keep her confined to the house, isolated and totally dependent on him while he enjoys her wealth?

I really enjoyed the theme of dreams that is very important in the novel. Night terrors, a nightmare you can't wake up from, the exhaustion of never getting a good night's sleep and the fascinating concept that you can control you dreams adds a whole new layer to the plot which makes this book stand out from the others in this genre. The reader does have to accept some artistic license towards the end but I was more than willing to accept the small liberties taken as Pinborough entertained me with such a clever, multilayered story I was totally prepared to suspend belief in the name of an excellent story. Isn't that what great fiction is all about sometimes?

I really enjoyed this book. It has great characters and a great premise. It is full of intrigue, suspense, and tension. It is a psychological thriller with a difference!

It reminded me of "Her Fearful Symmetry" by Audrey Niffenegger and the film "Inception".

"Behind Her Eyes" by Sarah Pinborough will be published on 26th January 2017 by Harper Collins.