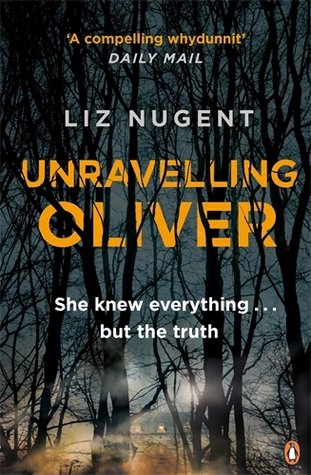 Oliver Ryan is a handsome and charismatic success story. He lives in the suburbs with his wife, Alice, who illustrates his award-winning children's books and gives him her unstinting devotion. Their life together is one of enviable privilege and ease - enviable until, one evening after supper, Oliver attacks Alice and beats her into a coma.
In the aftermath, as everyone tries to make sense of his astonishing act of savagery, Oliver tells his story. So do those whose paths he has crossed over five decades. What unfolds is a story of shame, envy, breath-taking deception and masterful manipulation. Only Oliver knows the lengths to which he has had to go to get the life to which he felt entitled. But even he is in for a shock when the past catches up with him.

This is a truly gripping and chilling tale which is absolutely fulfils the definition of psychological thriller. As the front cover says, this is a compelling "whydunnit" and I love that word- this is all about the why rather than the what. We know the crime, we know the villain and we know the victim. But what terrifies us the most is why Oliver did what he did.......It is a complex, exceptionally well written novel about a sociopath and its unbelievable this is Nugent's first novel as it has the accomplished feel of a much more established or classic author from this genre.

At only 230 pages it is a slim novel and really can be read in one sitting - preferably in bed, late at night, in the dark, on your own - not in the bath, as I did, which meant I suddenly realised I was sitting in stone cold water and very wrinkly! Although the bathroom acoustics were rather effective when I actually gasped out loud and whispered "wow" a few times - but for most of the time I was silent - so utterly enthralled and mesmerised by Nugent's haunting characterisation and beautiful prose.

The opening is excellent.

"I expected more of a reaction the first time I hit her. She just lay on the floor holding her jaw. Staring at me. Silent. She didn't even seem to be surprised."

You know when you pick up a book and just scan the first line and know immediately you are going to totally love it? Well, that's what "Unravelling Oliver" was like for me. And I did totally love it. All of it. Hugely.

"I am aware that I am not the easiest of people. Alice has told me so. I have no friends, for example. I used to, many years ago, but that really didn't work out. We drifted apart and I let them go - voluntarily, I suppose. Friends are just people who remind you of your failings."

Oliver is deeply unpleasant. He is so calm, matter of fact, ordinary, intelligent and articulate. He is so cold and unemotional. There is a real sense of underlying malevolence and evil lurking within him and he is immediately threatening. He is a loner, unfeeling and selfish. But completely fascinating.

"It turns out that I am a violent man after all. It comes as a shock to me. I have been psychologically assessed. I decided to tell them almost everything. Apparently, I have been harbouring bitterness, resentment and frustration since my childhood. Now, there's a surprise."

We also hear from several other voices over the course of the novel which effectively offers us further insight as the characters explain their relationship with Oliver, what they know of him and his marriage. This is a really good way of painting a more detailed picture as we cannot wholly trust Oliver. Also these characters are from different stages in Oliver's life so they offer valuable points of view as to how his past might have affected his current behaviour. Each of them have had a very different relationship with him, with varying degrees of intimacy and so the reader begins to build up a more rounded view which in turn reveals a much more unsettling portrait of Oliver.

Nugent is able to write each voice convincingly, creating an authentic character each time with a distinctive voice. The variety of voice and style helps release some of the intensity if we were only to hear from Oliver and also develops the themes and plot more effectively too. Stanley's voice did feel like a formal police statement or as if he was talking to a journalist but actually that is quite effective in itself as the reader really does want to interview these people and find out what they know about Oliver. And as Oliver has been apprehended and we know him to be guilty, it is authentic that some of these narratives have this feel to them. It also highlights how vivid and compelling Oliver's chapters are and to be honest, his was the voice I enjoyed the most and was always wanting to get back to.

However, that said, Eugene's character was very cleverly portrayed. Nugent's use of punctuation and sentence structure was very well done for this section and felt extremely authentic and convincing. I think she has real skill in creating memorable, distinctive characters through monologues which is due to her careful choice of vocabulary, punctuation and structure.

Nugent uses some fantastic imagery. This was one of my favourite sentences:

"There was a pregnant silence that threatened to give birth any minute. Eventually I broke its waters."

There really is depth, weight and resonance to her writing and it really deserves to be admired and savoured.

And as for the ending of "Unravelling Oliver", well, you'll just have to see for yourself!

I am really pleased that Nugent has been selected for the Richard and Judy Spring 2017 Book Club reads with her second novel "Lying in Wait" and hope that this ensures lots more people discover her chilling and haunting books.

For my review of "Lying in Wait" please click here:
http://bibliomaniacuk.blogspot.com/2016/06/lying-in-wait-liz-nugent.html