"The Trouble with Goats and Sheep" Joanna Cannon 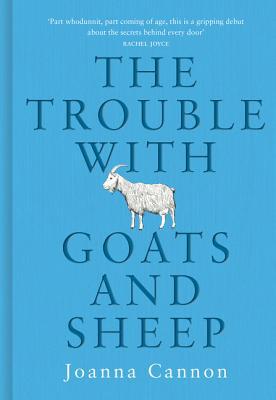 This book has been on my wish list for a long time and I am so glad that I eventually got to read it. As soon as I mentioned I was reading it, my timeline was flooded with other bloggers and tweeters telling me how much I would enjoy it - and they were not wrong! This book seems to be greeted universally with words like "lovely", "beautiful" and "delightful" and I think there are very few books that ever succeed in creating that warmth of response and a sense of yearning from readers who want to discover it again for the first time. So although I may be late, I can now join my fellow book bloggers in their fondness for this book and proudly say I have joined the herd!

The story is set in 1976 during the heatwave and this is immediately evocative of long, hot, summer days. We are immediately transported back to a time we can all picture through its sepia filter and many of us can see ourselves once again in the throws of childhood and immersed in our Jackie magazines.

The heroes of the story are Tilly and Grace, our ten year old detectives who set out to discover what has happened to neighbour Mrs Creasy who has mysteriously disappeared. The Avenues are alive with whispers and gossip and it is up to Tilly and Grace to dig behind the secrets, piece together information from the adult conversations and actions around them until they can discover the truth - something which will turn out to be much more than they anticipated .......

Narratives told from the point of view of a ten year old are tricky to get right, but when the author does, they are immensely effective and enjoyable. Cannon gets it right. I really enjoyed the chapters from Grace's point of view. I loved her voice, her observations, the connections she made, the conclusions she drew and that refreshing bluntness, naivety and innocence all at the same time which made me smile and chuckle to myself a lot. Through Grace and Tilly, Cannon is able to pose quite complex questions about human nature and reveal information about characters in the neighbourhood that is actually quite heartbreaking or unpleasant but the children's interpretation and responses bring a lightness of touch which prevent the novel from becoming too overwhelming.

For example, the throwaway comments like, "My mother spent most of 1974 having a little lie-down" actually reveal much more to the reader but to Grace, she's simply stating a fact and the wry humour is all in our heads rather than hers. Grace is brilliant at transferring any comments that could be derisory in that way only children can:

"My mother said I was at an awkward age. I didn't feel especially awkward, so I presumed she meant that it was awkward for them."

Grace and Tilly spend their summer in and out of the neighbours' houses as they set about investigating the disappearance of Mrs Creasy. Cannon captures the essence of a neighbourhood well and particularly an era when children would run between houses happily and play out for the whole day. One of my favourite characters was Mrs Morton.

"Mrs Morton was always trying to force chocolate on to us. She had a tin-full in the pantry and no children of her own. The pantry was cavernous and heaved with custard creams and fingers of fudge, and I often had wild fantasies in which I would find myself trapped in there overnight and be forced to gorge myself to death on Angel Delight."

But there are undertones and implications from the beginning that all is not as it seems and that actually, despite it's gentle humour and summer setting, this book is going to probe at more meaningful themes. And at times, Grace's observations are extremely accurate and perceptive.

"Why do people blame everything on the heat?" asked Tilly
"It's easier," I said
"Easier that what?"
"Easier than telling everyone the real reasons."

This continues as Cannon gradually brings in chapters from other households. Her prose is beautiful and her use of language creates images and characters effortlessly. It's possible to become immersed in her characters' homes and relationships and Cannon creates a perfect balance between telling a story that entertains and engages us as well as peppering it with moments of sadness, tragedy and comments that cause you to pause and reflect.

"[Brian] knew she would have pulled the blanket over her legs, and the Milk Tray box would be massacred and left to the carpet, and the television would be playing out a conversation with itself in the corner. He knew that she would not have risked moving from the edges of her crocheted existence. A world within a world, a life she had embroidered herself over the past few years, which seemed to shrink and tighten with each passing month."

Cannon's novel is about a close community with a hidden past. It is about the dangers of gossip and assumptions - not just for the obvious reasons, but I also liked how some characters use it to define themselves - for example, Brian reflects how his mother uses overheard snippets of conversation:

"It was as though she used hearsay as a web to trap people's attention, that she didn't believe she was interesting enough to hold on to them any other way."

The metaphor of goats and sheep is very clever and I really enjoyed how Cannon applied the analogy to the character's in the book. Tilly and Grace's search for God to help protect them all is charming and again highlights their innocence and simplistic view of a complex, dark adult world.

There are so many little comments or sentences that are slipped unassumingly into the prose or dialogue yet carry much more significance, weight or meaning. Also, there are many descriptions, images and moments caught briefly yet deserving of more consideration and thought. I really enjoy a story that has this kind of double layer to it; the writing is so polished and controlled it really deserves to be savoured so that all the nuances and details dropped gently on to the pages are really absorbed and appreciated. Cannon manages to make you smile and then want to cry all at the same time with her pertinent insights into human nature and the whole emotional reckoning of a coming of age story.

I recommend this book. It's a very enjoyable novel with much to savour and discuss. It is sure to become quite a classic. There is so much praise for it from so many acclaimed authors that I'm sure it will gain the success it deserves and it's great to see it in the Richard and Judy Book Club list for 2017.

If you enjoyed this book you may also like "The Girls" by Lisa Jewell, "Instructions for a Heatwave" by Maggie O'Farrell and "The Girls" by Emma Cline.