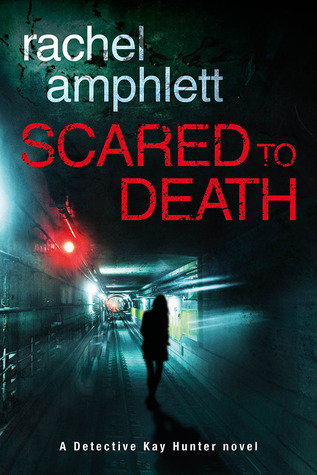 A serial killer murdering for kicks. A detective seeking revenge.When the body of a snatched schoolgirl is found in an abandoned biosciences building, the case is first treated as a kidnapping gone wrong. But Detective Kay Hunter isn’t convinced, especially when a man is found dead with the ransom money still in his possession.When a second schoolgirl is taken, Kay’s worst fears are realised.With her career in jeopardy and desperate to conceal a disturbing secret, Kay’s hunt for the killer becomes a race against time before he claims another life.For the killer, the game has only just begun…

This is Book One in a new Detective series from Amphlett - who has quite an extensive back catalogue of crime fiction novels already, unbeknownst to me when I came across her on social media! Amphlett has a high profile on Facebook and Twitter so I was keen to read "Scared to Death" after having seen such positive feedback from other bloggers and read a lot of Amphlett's own blog posts and Facebook updates. Then she mentioned the book was set in Maidstone - where my family live - and I decided I had to read it! I bought it, read it, then bought a few more for some of my family to read over Christmas!

Kay Hunter, the protagonist, is very likeable. She is sensible, intelligent, focussed and isn't afraid to speak her mind. Her strength and appeal often comes from the fact she asks deeper questions and doesn't settle for the most obvious explanation. She has an eye for missed details and I enjoyed the way she would, almost nervously, bring them up during the police discussions that would then set them off on a new course of investigation.

Although Kay is a new character and this is a new series, there are hints of a back story. It's cleverly worked into the novel so hints and clues are laid and enough interest generated for the reader to want to know more and to develop a relationship with Kay that will sustain itself beyond just one book, but without detracting or distracting us from the main plot.

The story starts with a great premise. There is a kidnapping, a ransom, a death. The novel is very plot driven and we go headlong into the story straight away. The rapid pace continues throughout the whole book. There is lots of well written dialogue which strikes the perfect balance of revealing enough detail about the characters so that they are three dimensional without slowing the pace as the crime investigation rattles along. The short chapters also help generate suspense and plenty of action.

This book is enjoyable because it has all the ingredients needed for a classic crime fiction novel. It has a good cast of characters all fulfilling the necessary roles, a good level of police procedural detail, pace, twists and complications all delivered at the right moment. Although it might feel a little straight forward and formulaic to some, I think it's actually very satisfying and it feels like Amphlett will become a 'go to' author for a reliable read which fits firmly in the category of crime drama.

With Kay Hunter, Amphlett has struck a good balance. Kay is not overtly flawed or hiding any deep traumas but at the same time is not a simple character. Her partner is a doctor, there is a sub plot about their relationship which adds another layer to the story and there is also the fact that Kay's career is in jeopardy and a back story about this lurks in the shadows.  This stops her becoming too predictable and flat.

"She'd certainly found out who she could trust and who would stand by her assertions of innocence after the whole debacle."

Although generally very stable and balanced, her dynamism is shown through her ability to notice detail and ask questions in front of her superiors who are sometimes too quick to judge her. She is willing to risk her reputation and alienate herself in order to get things right and make sure nothing is missed or conclusions are not drawn from misinformed presumptions.

"I can't help thinking this wasn't simply a kidnapping. Maybe Melanie's death was deliberate."
"I keep wondering if there's more to this than what we're seeing at the moment.'

This quiet, understated character who then thoughtfully raises a new point of view is very likeable, admirable and believable. Kay Hunter will appeal to readers and will gain their support and interest as so many people will be able to relate to this sort of person or indeed recognise it as the kind of detective they might make if they found themselves in this position. She also has grit and strength shown not just through the fact she has faced a Professional Standards Investigation but also through her comments before investigating the crime scene:

"Right, she muttered, Let's see what you did to her."

Most of the story is told from the point of view of Kay but there are some chapters that come from another character, Eli Matthews. These chapters are chilling and immediately get the reader asking plenty of questions about who this person is, what they might have done and whether they are good or bad. There is ambiguity in the voice to keep the reader guessing and as we read more chapters about Eli, his storyline grows and develops with its own twists and surprises. I liked following the voice of the villain and that Amphlett had given him his own storyline to play out alongside the main investigation.

For me, the moment when the significance of the title of the book was revealed was really chilling and created a lot of tension and suspense.

By Chapter 50 the writing has become so tense and dramatic that Amphlett has created a real sense of desperation and of time running out for both the victim and the police. The descriptions are great and the locations used are spot on for a crime scene, lending themselves perfectly for the dark and thrilling atmosphere of fear and danger which Amphlett evokes.

The ending was very good and we are fully prepared for the second instalment. Amphlett is not done with Kay Hunter - and neither am I! I look forward to the next book in the series and getting to know more about this character and the crimes she will work on. I would recommend this book for all fans of police procedural crime fiction. It is an easy read, a plot that delivers and with enough intrigue, twists, drama and suspense to keep you engaged and turning the pages.

"Scared to Death" published on 6th December 2016 and is available on Amazon.

Rachel Amphlett is the bestselling author of the Dan Taylor espionage novels and the new Detective Kay Hunter series, as well as a number of standalone crime thrillers.

Originally from the UK and currently based in Brisbane, Australia, Rachel is a member of International Thriller Writers and the Crime Writers Association, with the Italian foreign rights for her debut novel, White Gold, being sold to Fanucci Editore's TIMECrime imprint in 2014.

An advocate for knowledge within the publishing industry, Rachel is always happy to share her experiences to a wider audience through her blogging and speaking engagements.