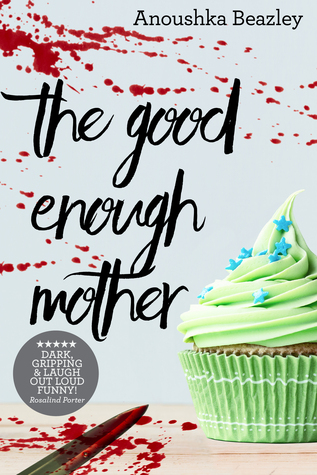 Which mother wouldn't be drawn by this cover? A bloodied knife, a cake...... And a great title - as we all struggle just to be "good enough". Turn to the first page and read the opening quote- it will hook you right in. The quote in itself a clear warning that this book is not going to be quite the story you expected. This is something for readers who are looking for something edgy, risk taking and refreshing.

"Oh how I hated the school run. It was like a living thing. Every day, just at the point I thought I had no more hate left in me, I found a way to hate it more. It was like a mutated lizard's tale that, if cut off, would not only grow back but grow back even bigger, with festering pustules, making it even more loathsome."

Blogger Joanne Robertson drew my attention to this book with such an enthusiastic recommendation it literally leapt out from my Twitter and Facebook feeds. She called it a hidden gem - one which she, and therefore me and many others- could easily have missed. I am so grateful that I decided to give it a go completely based on Joanne's review as otherwise I would have missed one of the most darkly comic, satirical and witty reads of this year.

When Drea's boyfriend walks out on her for another woman, she is left in the house with his teenage daughter Ava. Not a natural mother, not a conformist and not a typical "Chelsea-Tractor-Lady-Who-Lunches", Drea struggles not only parent but more importantly, find the fees to keep Ava at her prestigious private school. But watching the wealthy Yummy Mummies inspires her to hatch a daring (and criminal) plan which will upset every single resident in the quiet, affluent town of Gatlin and propel Drea into the thick of a compelling, dramatic, catastrophic and entertaining story of crime, murder, love, relationships and the politics of the school gate.

This book is not for the fainthearted. Drea is a woman who says all the things we keep to our inner voice, aloud. She is crude, she uses expletives, she is blunt. She is witty, sharp, observant and most definitely her own person. I envied her gall, her frankness and her attitude. But I loved her. She made me laugh out loud, choke on my drinks and even hold my lips together so I could try to keep a straight face and not draw too much attention to myself when I was reading in a cafe. I snatched time to read this book whenever I could, taking photos of a few pages to text to friends like a naughty school girl passing an illicit note during class.

Drea appears disinterested in Ava and parenting. She is lazy. She smokes and drinks and is not the typical role model or parent in this small, leafy suburb. Her hopes for Ava are not the same as the competitive alpha mothers she faces on the school run.

"Ava had come to live with us when she was four years old. It might have been nice to think some of me had rubbed off on her. However......her need to achieve was more than a little disappointing."

But despite this, Ava and Drea seem to get on well - or at least understand where they stand with each other. As Drea says: "Ava and I had unspoken agreements. I wasn't interested in any of her friends or her school life and she in turn, would not force me into situations where I needed to behave as if I was."

For me, as a parent, there was something very liberating reading about Drea. Her voice is a real breath of fresh air. We know she will not be winning any parenting awards or penning a guide to parenting book (more's the pity!!) but she is a kind of anti hero.

"'I never actually married your father and I'm the only mother you've got coz the real one doesn't give a s***,' I screamed. There is an outside possibility I could have handled that better."

"'Plus I feel very sad today,' Ava continued. The 'plus' was a clue. It meant I should have started listening earlier than I had."

It is hard for writers to strike a balance with "yummy mummy / slummy mummy" characters. I find often authors can make them either too saccharine, too cliched or they become too much of a caricature or too unpleasant. Beazley does not do this. For me, Drea was believable. Everyone has an inner Drea in them some days and I think Beazley managed her protagonist very well. I was rooting for her and I was very much involved in her plight throughout the whole novel.

As well as dark humour there is also sadness and seriousness in this novel. Drea is depressed and has a bottle of pills in her bag - enough to commit suicide when the right moment presents itself. As with everything, Drea is upfront and matter-of-fact about this.

"Today was the day I was planning to kill myself but then I read Alex's note and, from there, I became unreservedly and altogether distracted."

This issue adds tension to the situation. As the novel continues and things become more serious and more sinister, it helps to create more intrigue and complexity.

Beazley is clearly a talented writer. Not only are her characters full of vividness and colour, but her attention to detail is thorough, her imagery and description is effective. There are moments when the wry voice of Drea comes through, for example; "The most modern thing about our house was our neighbours" but also when the description is simply impressive:

"The sun twinkled like a girlish courtesan, hopping from cupboard to dresser, unsure where to lay her balmy touch. A yellow bath of colour tinged the bedroom from the large bay windows, all the way to the faded flowery wallpaper behind the bedstead."

So the financial pressure mounts and mounts until Drea spots Regina's gigantic rock sized diamond ring that "sat fat on her yoga-stretched fingers, like the missing aid for a third world country" and a plan starts to form in her mind. Drea's initial foray into illegal activity begins with her usual dry observations which make the reader wonder just how aware Drea is of her actions and potential consequences:

"I was covering every role on this job, doubling up as my own get-away driver.I guess that's how all small business ventures start out."

But things quickly take a more sinister and chilling turn of events. The pace of the novel cranks up as Drea becomes caught up in a more complex web of crime; a journey which also forces her to confront her issues, her past and her role as a mother. The freshness and originality in this novel comes from the fact that it is like a cross between 'Bridget Jones' and an episode of 'Midsummer Murders' penned by Caitlin Moran. It is a bit of popular women's fiction and crime fiction all pilled in together and, with all credit to Beazley, it's a successful combination that doesn't ever feel too far fetched, too ridiculous or too contrived. There are serious comments made and serious issues explored. It is not a farcical novel nor is it flippant about the relationship between a mother and a daughter or even a privileged community like Gatlin.

I really enjoyed this book. I don't think it will be for everyone as Drea's comments can be quite shocking and there is a lot of swearing but it was the perfect tonic for me at the start of term! I would love to have Drea in my life. After all, who hasn't been to a baby and toddler group where the women are all sat "convincing each other and themselves that merely having squeezed a human out of their vagina is basis enough to both begin and sustain a friendship" and who hasn't felt like Drea, who while listening in their "cacophony of banal high-pitched incomprehensible chatter" observes, "Why not just say 'Your baby is fat' and 'I was hoping not to see you here'?"

This was not a book I would have necessarily sought out or perhaps even picked up but I am immensely grateful to Joanne for bringing it to my attention. I will be rereading it and I will be recommending it. I have genuinely enjoyed being made to laugh out loud this week while engrossed in the pages. I am absolutely so grateful to Anoushka Beazley for sending me a copy of "The Good Enough Mother" to read in return for a fair, honest and unbiased review. I will definitely be looking out for her next novel as I think she shows great promise.

Thanks again to Anoushka Beazley for a copy of "The Good Enough Mother" which published in July 2016.