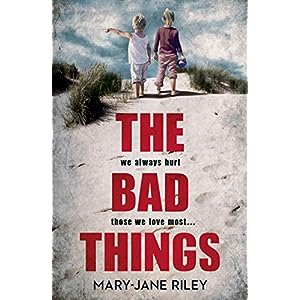 I enjoyed this a lot. For me, it started off as a very competent thriller with all the usual ingredients, but the last third really packed a punch and even when I thought I had it all worked out, Riley had a few last minute twists to throw in!

This is quite a harrowing story about loss, parenting, relationships and mental illness. There are some incredibly sad passages and deeply traumatised characters but Riley handles all these things with sensitivity and balance. The writing is emotive but this also ensures tension, suspense and a real engagement with the characters.

The main protagonist is Alex, sister to Sasha. Sasha's two young children disappeared 15 years ago - only the body of one of them found. Life has never been the same since and each sister still struggles to continue with every day life even after such a long period of time. Sasha's marriage has disintegrated and Alex finds it hard to commit to relationships, as well as juggling the parenting of her own son who has grown up in the shadow of the family's terrible history. Then Jackie Wood, the woman jailed as an accessory to the children's murder, is released from prison and Alex, a freelance journalist, decides to chase her for an interview........

As soon as I had read the blurb of this novel, I knew I wanted to read it. For any parent, it is unnerving to read about children who are taken as it has to be our worst nightmare, but at the same time, it always makes for a compelling, emotional read, particularly with recent memories of some of the more high profile cases reported in the news.

Riley expertly creates convincing characters in detail. Alex's character is consumed by the dilemma of meeting with Jackie Wood - her professional duty, her duty to her sister, her duty to her nephew and niece, her duty to her own son and to her own boyfriend. She struggles to deal with her own issues as well as the responsibility she feels towards her sister. Following an intense opening sequence, Alex's poor judgement and panic lead her into the very thick of the investigation following Jackie's release and this is exciting- I did question how convincing her behaviour was, but don't worry, Riley has it all worked out and as events continue to unspool, Alex's reticence to tell the truth become explained by the hints about the further darker secrets she is trying to hide.

Inspector Kate Todd, who was involved with the children's disappearance 15 years ago, is recalled to the case. She is an equally engaging character. Once again, haunted by the memories of finding the little boy's body all those years before and the repercussions of this trauma case still affecting her personal life today.

Crime writer Corrie Jackson appeared in an article recently about a top tips for writing. She quoted something she always tries to keep in mind when writing - every character, however big or small in the overall story arc, is the protagonist in their life. I thought this very fitting when I read "The Bad Things." There is quite a wide cast of characters but, like Agatha Christie also does, she encourages us to focus on a couple of main people, becoming absorbed in their narratives and not really taking that much notice of the people milling about in the background. Then as the book reaches its climatic ending, we realise that actually we have been looking at the wrong faces and listening to the wrong voices. Riley develops an intense backstory for each of her characters and the importance of this is increasingly obvious in the final stages of the story. The way the threads converge together and join up all the dots is exceptionally rewarding and gripping.

Although I had some inklings and suspicions about what I thought was going on, which were largely proved to be right, I enjoyed the fact that Riley allows you to do this. In fact, she leads you happily down this path- but then suddenly trips you up a few times just when the end is in sight; just enough to knock your breath out of your sails as you race through the final pages. She is the story teller here and she is in control of the story!

On a totally different note, the location and settings are also very visual. Set in Norfolk / Suffolk, the description is vivid and I enjoyed reading about places I could easily imagine while on holiday in the county.

"The Bad Things" is a good read. I am really keen to read the next book in the series now and will definitely be keeping track of anything Riley publishes. I'm pleased to have discovered her books!