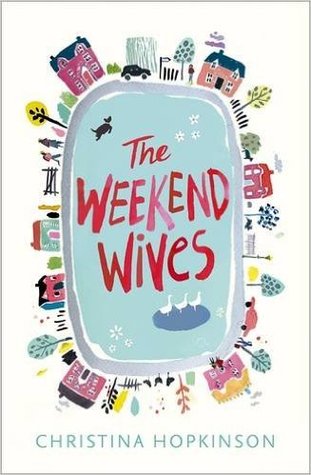 I read "The Pile of Stuff at the Bottom of the Stairs" in 2011 when I was juggling a brand new baby and a sleepless toddler. I needed something light that I could read quickly in those desperately snatched moments between feeds and changing nappies. This was perfect! Not only did it "speak" to me- it made me laugh, giggle and even spit out my tepid tea (no child was harmed during the reading of this novel). I handed it on to my equally over tired friends but not before pointing out at length all the bits where Hopkinson had captured the very things we had complained about with our own husbands! So when I saw this new paperback arrive, I absolutely knew I had to read it!

Meet the "Weekend Wives"- a wife who's husband works away and only comes home at the weekend.  Or more accurately, a wife who misses her husband when he's gone, but wants him gone when he's home! This group of "Weekend Wives" live in an idyllic rural village. There is Sasha and Ned, whose success in America means he's absent for months on end. Their main method of communication is via Skype. Tamsin's husband John works away all week but ensures he keeps track of her every move by eerily getting her to text selfies throughout the day. Emily and Matt have recently moved in to the area and the harsh reality of living in the countryside is gradually dawning on Emily. And to make it worse, when Matt does return at the weekend, he is growing increasingly preoccupied and distant.

I truly enjoyed this book. From the opening pages I was snorting in agreement, recognition and pleasure as Hopkinson's observational wit leapt of the page. It is a perfect recipe for a summer read, a lazy Sunday read or just to give you a bit of a lift or gentle escapism. It covers all the basic elements essential for a chick lit read - it's full of melodrama and madness; it's charming and heartwarming, there are moments of shock, tears and laughter. The wry tone keeps it light and engaging. Hopkinson's insight into marriage, commuting and women's friendships are spot on and will have huge resonant and appeal to any reader's who can relate to this set up.

The novel is full of contemporary references, so even though the pressures on a marriage may not have changed that radically over 50 years, this novel feels like it is taking a fresh look at those issues and it is really easy to engage with it.

Each character is well constructed and realistic enough to find them authentic rather than cliched or over the top but with enough vitality and spark to create entertainment and drama. There is naive, young Tamsin who has always lived in the town and is slightly out of her depth amongst the new families that have now begun to set up home here -most people moved away, particularly if they wanted a job that was "new fangled" with the word "digital" in it. She is controlled by John who, even during sex, "gives commands with the precision of a powerpoint presentation." She has no sense of self worth and John's hold over her is unsettling and disturbing.

Then there's confident, wealthy, privileged Sasha who actually feels as if she is a doll "with a certain number of preprogrammed speeches that would vomit out at the touch of a button." Her primary school aged son explains to his babysitter that he needs to read aloud for 15 minutes everyday as it's "part of his success criteria.....to see if your learning is competent, accomplished or exceptional." But who is this strange woman who seems to be lurking at the bottom of the driveway and what is bothering her daughter?

My favourite character was Emily who having wanted greenery now "wants tarmac and pop up coffee shops." She finds the countryside like a beautiful man she knows to be gay - "appreciate its aesthetic splendour but knew she'd never really get it." She craved to be a stay at home mum with her non-Aga-Aga and persists in creating "as a family time" but her attempts are continuously disrupted by screens and she is beginning to feel bereft of the intellectual stimulation her career had offered. I loved that the first conversation they have when Matt returns at the weekend is who is more tired.....Oh yes, I've been there!!! And that word "work" which "shuts down any argument now that she could no longer use it as her excuse".

Emily brings the 3 women together to form the club "Weekend Wives". Little do any of them realise just how significant this friendship will become, how they will end up forming such strong bonds which will support them as they confront difficult pasts (as well as a tricky present) or rediscover themselves and their potential. Above all they will support each other as wives and mothers throughout a time of unease and change.

It is a comfortably predictable novel with a happy and satisfying resolution. The characters are endearing and although a little exaggerated, not unrealistic. The reader will feel empathy and friendship towards them. It is a witty novel and I smirked, giggled and rolled my eyes in agreement all the way through it. Sometimes it was a little close to home ("I've just got something to check on line said Matt standing in the middle of the room staring open mouthed into his phone....physically there but mentally absent.") and sometimes voicing thoughts I'm not brave enough to say aloud ("there's something comfortable about the hamster wheel of work, you don't have to worry about where you're going, just go round and round.") Hopkinson is insightful and although there are definitely some serious issues and moments, it is all well balanced in a tightly constructed plot. There is more to each of these women than just being a wife and they need to find this for themselves. Hopkinson clearly has a lot of affection for her characters and carries them through their emotional journeys as they work out just what kind of wife they are, and what kind of wife they want to be, with comedy and humour. I have to say, at this moment in time, it hit the spot and I really did enjoy it.

My huge thanks to Hodder Books for a free copy in return for a fair and honest review. For more recommendations and reviews please follow me on Twitter @katherinesunde3 or sign up to receive future posts by email.